Getting There: Qatar Air was the best, and the only real option picked by our travel agent. We booked tickets early and they cost about $1,000 for a round trip. The flights are Nairobi-Doha and Doha-Baku with a total journey time of about eight hours. Our layover in Doha was short and we had to sprint through the airport to get our connecting flight. Fortunately, we had received boarding passes for the Baku leg in Nairobi, but in the rush, we lost some documents.

In the weeks before departure, there was some confusion about how to obtain a visa to enter Azerbaijan. The country has an e-visa page, but the pull-down menu of country choices does not list Kenya. Some other travellers going for the race chose South Africa as the nearest country to complete the e-visa application but we chose to wing it.

On arrival at Heydar Aliyev International Airport (GYD) in Baku, there was a special desk section for F1 fans with special ushers around, dressed in F1 garb, ready to assist. You showed your ticket, paid a $26 fee, and were issued with a 30-day single-entry visa. Note: We had bought our tickets through the official F1.com site and they arrived two weeks before the race, delivered from the UK by DHL to Nairobi. 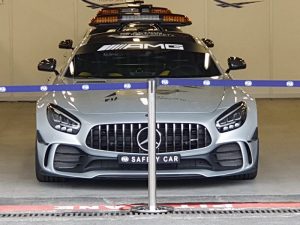 After getting an e-visa, you then proceed to the immigration area.  There, they ask a few questions about the purpose of your trip, and you also have to provide an email and phone number (we gave Kenyan ones).

Where to Stay: We had made a reservation at the Viva Boutique using Booking.com which we had made a while back and the rate was about $120 (200 Manat). They cost much more if you have booked late. Hotels tend to block off and charge higher fees for Grand Prix weekends with a room at about 400 Manat on race day while other hotels  charge 800 Manat.

We had arrived a few days before the race and had made an Airbnb reservation for the first few days. The homeowner had offered to pick us up from the airport, and we had even negotiated an amount for this. But after clearing immigration, the Airbnb host was not answering his phone and we got worried. So we went to the hotel and negotiated for extra nights.

Staying in Touch: It’s usually advisable, when visiting a new country, to get a local phone SIM card, in order to avoid roaming rates that are very expensive. We got Azercell lines from a booth at the airport that cost about $20 which came with lots of minutes, SMS and a 10 GB data bundle that lasted the whole trip. This enabled lots of phone chats, browsing, and sharing of images and videos from the Baku trip with friends. However, like in a few other countries, you can’t make phone calls on WhatsApp – a VPN is advisable for that.

Baku is a small town. Malls are modest in size. Some kiosks are rather expensive, compared to the supermarkets.  By Monday, after the race, malls were quite empty.

One popular tourist attraction is Yanar Dağ, (“burning mountain”), a natural gas fire which blazes continuously on a hillside on the Absheron Peninsula on the Caspian Sea near Baku. Tourist charges to visit are 2 Manat each. 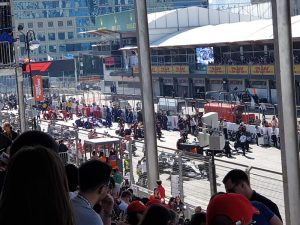 We had great seats across the pit lane that cost about $500 and it was a fun vantage point. The race itself was kind of anti-climactic given the dominance of the Mercedes team who recorded their fourth consecutive 1-2 finish in 2019, and pre-race favourites Ferrari again seemed lost. The stage was set on Friday, during practice, when one of the cars from team Williams ran over a manhole cover which had come loose. This caused extensive damage to the car and the session had to be stopped. Other teams, including Ferrari, had their practice time limited as a result and this may have contributed to their Sunday pace. 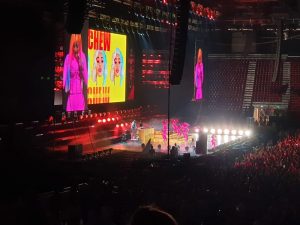 1 thought on “Guide to Baku, Azerbaijan”