In its recently released annual reports, Emirates Group had revenue of US$ 27.2 billion, and it’s 30th straight year of profits at $1.1 billion and will pay $545 million as a dividend to the Dubai Investment Corporation.

Emirates Airlines revenue increased 9% to US$ 25.2 billion, while its profit increased to $762 million and this was attributed to strong performance in cargo which offset fuel price increases of 15% during the year. Fuel now accounts for 28% of their operating costs, while staff expenses are 15%. The Emirates Group has 80 subsidiaries and 103,000 employees, a number which declined by 2% in the year. The report notes that there was a 2.2% reduction in flight handled at Dubai’s two airports due to termination of flights between Dubai and Qatar, from the, still ongoing, dispute with Qatar.

Emirates carried 58.5 million passengers and received 17 new aircraft, in the year taking its fleet to 268. It is the world’s largest operator of the Boeing 777 and A380 planes and announced new orders for 36 A380’s and 40 B787-10’s. Emirates revenue was from six regions topped by Europe with $7.3 billion revenue, followed by East Asia/Australasia $6.9 billion, the Americas $3.7 billion, and revenue from African routes was $2.6 billion (an increase 8%).  In Africa, they fly to 27 destinations and the report notes that their results in Africa were achieved in spite of political instability and currency volatility including massive devaluation in some countries. Revenue from the Gulf & Middle East was $2.3 billion, and West Asia/ Indian Ocean was $2.1 billion. During the year Emirates signed partnerships with Fly Dubai and Cargo Lux and extend one with Qantas. 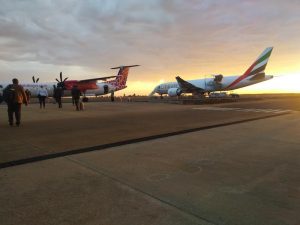 Emirates SkyCargo revenue was US$ 3.4 billion (14% of the airline’s revenue) from its freighter fleet of 13 777’s, while Emirates’ hotel’s revenue was US$ 203 million, Emirates also tested the use of blockchain to streamline cargo delivery, digitize their supply chain and eliminate paper usage.

Dnata, a separate entity in the Emirates Group, had its best year yet with $3.6 billion of revenue and $359 million profit. Dnata serves 300 airlines in 35 countries and its international business which included handling 3. 8 million tons of cargo and serving 55 million meals during the year, now accounts for 68% of its revenue. Dnata acquired AirLogistics in the US, signed deals to do ground handling in New York,  and maintenance in Singapore and had other expansions in Europe while creating two new travel reservation systems.