The 7th BAFM – Building African Financial Markets seminar was officially opened by Kenya’s Deputy President William Ruto with a joke that it was important that the organizers, who were the African Securities Exchange Association with the Nairobi Securities Exchange go out and clarify the difference “stock exchanges” and “stock theft” which is a big menace in Kenya. He then mentioned that securities exchanges provided assets protection and wealth creation and that some companies that the government had divested from like Kengen, Safaricom, and KCB were now among the leading institutions in Africa.

He asked the capital markets to help revive the agricultural sector and urged them to work on a commodities exchange and use block chain to create a ledger for collateral, and that he hoped the summit would redirect shareholders attention to the opportunities that reward vigilant, flexible and innovative investors.

One of the highlights of the day was a talk by Terry Adembesa who explained the complex processes and long steps that the Nairobi Securities Exchange has to go through to introduce new products and to persuade companies to list on the exchange. He explained how they had passed regulations to allow derivatives trading and short selling (which they plan to introduce later in 2018 for selected equities_ and to also allow market making by selected firms for stocks and bonds. They had made strides get pension and insurance funds to recognize their new products like Real Estate Investment Trust’s (REIT’s) and lobbied alongside Barclays to get Exchanged Traded Funds as an accepted class of equities that local funds could buy into. They had also lobbied the Kenya Revenue Authority to waive taxes on development REIT’s.

He added that African exchanges like Kenya’s have low volumes compared to Johannesburg and Mauritius; they mainly trade equities, with low participation from local investors (Trading at the Nairobi Exchange is 35% by local investors compared to 100% in many Asian markets) and later this meshed well with a nice presentation on the African Financial Markets Index by George Asante of Barclays Africa. It was a nice illustration of the maturity levels of stock exchanges in 17 countries that constitute 60% of GDP of Africa, with a startling finding that there was a significant cost borne by African countries by them not having effective capital markets.

Sallianne Taylor explained how Bloomberg  collects data and showcases African companies and exchanges to the wider world, facilitating financial leaders and exchanges to meet investors and financial journalists, while Nora Owako traced the evolution of Safaricom’s M-Pesa which has changed over the years to match the needs of consumers and now encompasses international remittances, savings, loans, utility payments, and merchant finance.

Another striking revelation was by David Waithaka of Cellulant during one of the afternoon panels on fintech as an enabler. The company, which was founded in Kenya, had run a platform in Nigeria that had connected 15 million farmers to 6,000 agro-dealers for farmers to get inputs and with commercial banks providing bridging finance to agro-dealers as they awaited reimbursements from the government. The program had a redemption rate of 59% and through it, farmer incomes improved from $700 to $1,800. It was later extended to rice and saw $2.4 million worth of commodity trades in two months. It is being rolled out in Liberia and event participants asked” Why not Kenya?”! 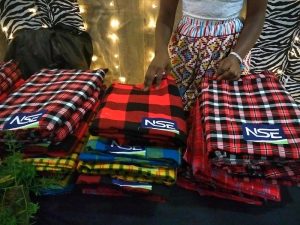 One of the shocks of the first day of the BAFM was from Joseph Tegbe of KPMG Nigeria who gave a talk on cybersecurity and warned that there was a real possibility that countries could use cyber attacks to target and destabilize the stock exchanges of other countries.

NSE Chairman Samuel Kimani thanked the BAFM gold sponsors – Bloomberg and Barclays, silver ones – CMA Kenya, Safaricom, Kengen, EFG Hermes, and others. The day ended with news during a panel on fintech as an enabler, that Barclays launched a green mortgage product, offering cheaper financing for energy-efficient homes

Day one of the 7th BAFM – Building African Financial Markets seminar was held at the Villa Rosa Kempinski Hotel in Nairobi Kenya on April 19, 2018.