The story is of Kenya’s colonial banking era is really about three banks – the National Bank of India (NBI), Standard Bank of South Africa (SBSA) and Barclays. The arrival of Barclays in Kenya changed the banking sector greatly as it sought to end the long relationship that the National Bank of India had with the colonial government in Kenya. Also when Barclays arrived, they found that the Standard Bank controlled many of the white accounts, so they set out to include more Africans as customers. Africans had bank accounts from around 1926, and by the 1950’s Barclays had more African accounts than settler accounts. 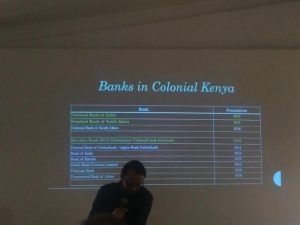 All banks eventually had to break with their colonial past and the British empire, and a big loser in the period was SBSA which had concentrated on the white settler population. Kenyan politicians tried to engineer boycotts of businesses related to South Africa due to the Apartheid regime and African customers now shunned it. Officials at the bank wrote to their headquarters about the problem and as a result, the name was changed by dropping “South Africa” from the name, and SBSA became “Standard Bank.”