Air France has resumed flights to Nairobi and will join an expanded joint-venture partnership between KLM and Kenya Airways that was established in 1995. 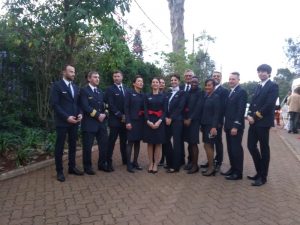 The inaugural flight using a Boeing 787-900 landed on March 26, which was eighteen years to the day when Air France had ended its Nairobi flights. The new flights will be three times a week using a Boing 787 and AF814 will leave Paris-Charles de Gaulle at 20:50 on Wednesdays, Saturdays, and Sundays, arriving in Nairobi at 6:00, the next day and AF815 will leave Nairobi at 08:20 on Mondays, Thursdays, and Sundays and arrive at Paris-Charles de Gaulle at 15:50.