From a Kenyan magazine issue – The Weekly Review in September 1985.

The Receiver & Manager of Kenatco offered for sale the business and assets of the two businesses – haulage and taxis, either together or separately as going concerns. This meant the businesses were operating, and receiver/managers are usually appointed by financial institutions to take over what they see as struggling businesses that are having trouble paying their bank debts, but which could be turned around with better management. Banks do this before the businesses shut down completely. The Kenatco businesses were:

A document giving full particulars of the business and assets for sale was made available and could be obtained at a cost of Kshs 300/ – (refundable in the event of a successful purchase of the assets) from J .K. Muiruri, Joint Receiver and Manager, Kenatco Transport Company, Ltd., Alico House, P.O. Box 44286, NAIROBI Tel. 721833. 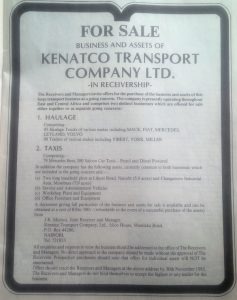 A separate notice was also issued for the sale of other assets of Kenatco – which were surplus vehicles, equipment and scrap items that were not part of the “going concern” sale. The assets were located in two towns with offers due on October 19, 1985, and the receivers & managers described them as:

Also see this Nation column by John Kamau about how Kenatco re-entered receivership in 1983, leading to this particular auction of their assets.