This is the first class cabin of the lunatic express, the 120-year-old Kenya Railways line (operated by Rift Valley Railways – RVR), that the Standard Gauge Railway (SGR) is meant to improve on. The cabins are about 40 years old; they are mostly used by tourists or adventurous travelers and families taking scenic journeys to and from the Coast or Rift Valley.
It was disappointing to see pictures from Kenya Railways of what #SGR “first class” will be – it looks like a third class with swivels seats – this after a $3.2 billion mega-project?. Yes, the trains will move faster, but apparently, they won’t go too fast because this is Kenya where they may encounter people or wildlife on the tracks. 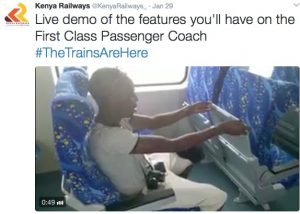 By looking at this chart of train cabin seats in China, KR is a correct, but the first class of China and the new SGR is not the same as the first class on the old (RVR)/Kenya Railways. China has first, second, and business class (which has lie flat seats) like an aircraft – but no economy class.

What we know as the first class of the old Kenya railways, qualifies as a luxurious “sleeper coach” in China which offers privacy and comfort. SGR Journeys will be faster, perhaps 5 hours from Nairobi to Mombasa compared to the current train service by RVR which takes 15-20 hours. The  train is also used by hundreds of residents who live in small towns along the railway and who will appreciate the improved new cabins. 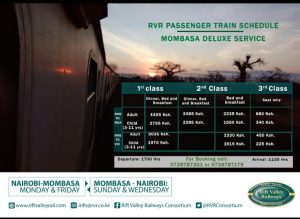 But will Kenya Railways offer some new sleeper cabins to improve on the old railway service? The Kenya Economic Survey 2016 shows there has been a continuous decline in rail passenger indicators of journey, passenger-km and revenue. The major reason is prioritizing on the freight, which is more profitable than passengers’ services hence the available locomotives are prioritized to freight.