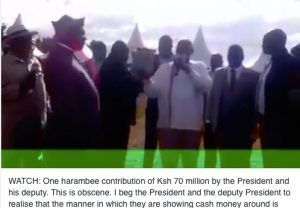 Screen grab of the Tuko.Co.Ke video

There was this fantastic story on Tuko website about huge donations that were made to a Church on behalf of the President and the Deputy President.

They were each said to have given 34 million shillings in a video shows the Governor of Narok county presenting an envelope with the cash. He also gave 6.8 million of his own, and another 3.4 million from another governor.

The sum of 34 million is incredible. Indeed, it is almost the  same amount as the equally implausible claim of 40 million from NYS that Josephine Kabura says she carried out of a bank hall on more than one occasion.

So what’s more likely?. I though it may have been a donation in Tanzania as Narok county borders Tanzania. But a different story by Citizen TV of the same event notes that the Kenyan contingent donated a sum of 82.6 million shillings in support of the Ugandan Church in Sebei, Kapchorwa District.