Exactly a week ago, Americans went to the polls and elected Donald Trump as their new president. This was a shock result that few experts expected, as most polls expect that he would lose to Hillary Clinton, as his inexperience and comments about groups, like women and Hispanics, would lead them to vote against him in droves. But that did not happen and he will become the 45th president of the USA from January 2017, replacing Barack Obama. 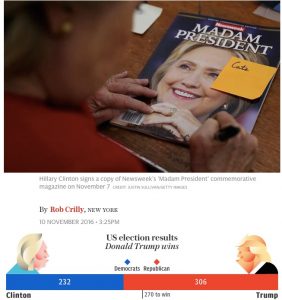 My Trump Presidency outlook is here:

Expected Winners: (include) American businesses – building and oil companies, Russia, Israel, US airlines, and the US military. Also Coal, US highways, airports, and infrastructure.

Picture from a UK Telegraph story on the US election.