Kenya Airways announced their results this morning at their Pride Centre in Nairobi. The CEO – Mbuvi Ngunze , Finance director and management all  referred to the airline being stable after a turbulent stall. 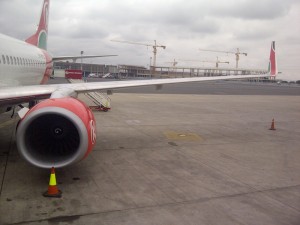 US flights: While the government is excited about category one upgrade of JKIA, Mbuvi said that their priority is code sharing with a US partner, more than doing direct flights themselves.

Currency reparation: Globally, airlines have $4 billion in non-repatriated currencies (with $400 million in Nigeria) and KQ faces challenges in Sudan, Nigeria, and Angola

Other: The last good year for tourism in Kenya was 2011, when there were 1.8 million tourist arrivals (it was 1.3 million last year) and 2017 will be an election year for Kenya. They are yet to assess Brexit impact but commodity slowdown and currency crunch has seen a slow down in the African routes they operate in.

They said the Government of Kenya and KLM, remain supportive of the company’s turnaround efforts which are embodied in Operation Pride, and this comes in a year in which they were voted the leading airline in Africa and leading airline for business class.