It’s time for Kenya Airways (KQ) to release their (March) 2016 results, later this week. They are coming off what was, arguably, the toughest year (2015) in their 39 year history, when they lost almost Kshs 25 billion. This was largely a result of their decade-old ambitious Project Mawingu that they the airline invested in coming up short. 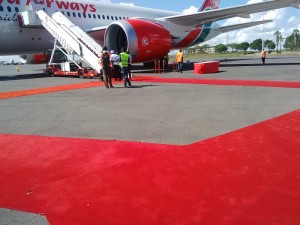 The plan was for a massive fleet and route expansion program to support the growth of passenger numbers in and through Nairobi and Africa. They bought new aircraft (mainly Boeing 787 ‘Dreamliners’), but the aircraft arrived a few years late, and when they did, the passenger numbers had not grown to match their expectations, and they were left with new and expensive equipment that operated below the expected capacity or remained idle. While the European routes are at 80% capacity, African routes are at about 60% and they get about 60% of their business flying around Africa, which has also become a very competitive region with  KLM, Ethiopian airlines and (now) 3 large Gulf-carriers competing for passengers out of Nairobi.

For the half-year, they reported a cabin factor of 68%, flew about 2.1 million passengers with revenue of Kshs 56 billion, but the half-year loss was Kshs 11 billion as the slowdown of commodity economies, terror alerts, route shut downs due to Ebola  and Nairobi (JKIA) runway repairs continued to affected the passenger numbers. The weakening Kenya shilling also contribute to their reported losses as they had to revalue their aircraft loans that are denominated in dollars.

In the year, the board also faced shareholders who wondered if they would be around in a year as they embarked on a  turnaround plan to stem the losses, secure funding for the future and fix the company  balance sheet.