Today’s newspapers have the annual general meeting (AGM) notice from Cooperative Bank (Coop). There are some subtle differences from years past, which may indicate stricter rules for all banks, especially in light of the recent bank issues at Chase and Imperial. This is in terms of clearing directors who are meant to be the safeguards for the banks and they depositors whose funds the banks collect and hold. 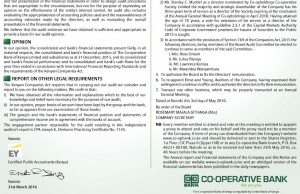