Kwale Mineral Sands (a.k.a Base Titanium) is now being celebrated as Kenya’s most significant mining operation. According to a report released in Nairobi, the mine in Kwale will run for another 12 years contributing about $20 million annually to the government through royalties and another $100 million to Kenya’s GDP, according to an Ernst & Young report that was commissioned to quantify the economic impact of the project.

The $310 million ongoing investments ($106M construction, $56M engineering & design, $41M equipment, $107M others) supports 3,432 jobs (642 at Base, 1,429 in supply chain, and 1,361 others). This is down from the 8,200 one-year jobs during the construction period in 2012 to 2013 but that impact has now stable at 4 indirect jobs for every 1 direct job at the mine. The workforce is 96% Kenyan, with 63% from Kwale, and the operation has just 38 expatriates (down from 65). This is in a county where many residents are subsistence farmers or squatters and Base is now leveraging on the Kwale county development plan to support schools, hospital, and agriculture including cotton farming with exports to Australia.

Ministry of Mining Cabinet Secretary, Dan Kazungu said that he wanted to see more world-class mines like Base, and that the government planned to have mining’s contribution to GDP go from the current level (less than 1%) to exceed 10% by the year 2030. He said the cabinet passed a mining policy in April 2016, and that and that the mediated Mining Bill now awaits the president’s signature, after navigating the senate and national assembly. 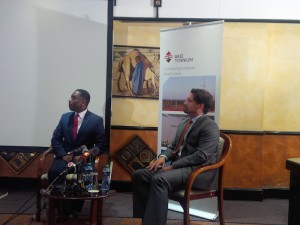 He said this year’s budget will approve an aerial geophysical aerial survey and that the government will also ask British geological societies to share the data they have had for decades on Kenya’s potential mines. He asked that, if you get a license from the ministry, “use it” – whether trading, exploring, mining – and try to create two or three more large mines like Base. He said that Kenyans could take part in the mining sector without digging any rocks – as they could offer training, consultancies, supplies, food, financial services, logistics, security etc. and that Kenya has applied to host the AU’s  African mineral development center in Nairobi.

There was also a nice Q&A session he was asked about the role of counties and tribunals in approving mining licences and the status of the Fluorspar mine in Elgeyo Marakwet. Unsaid in all this, is the love that Base Titanium has for the Mining Cabinet Secretary; unlike his predecessor who never visited the Kwale site and barely acknowledged the largest mining operation in Kenya.