Now’s it’s out in the open. That is the story of the non-executive directors and shareholders at Imperial bank.At a press briefing today they broke free of a media blackout that was requested by the Central Bank (CBK)  and the Kenya Deposit Insurance Corporation (KDIC) (the receiver manager of the bank), but  which they now feel has been used to leak only one side of the story on the collapse of the bank. 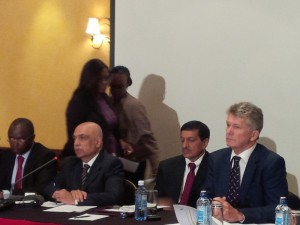 My take, is still the same as in Part I

The only way for Imperial Bank to survive is if it is bought out by a large, multi-national, or regional bank. That bank will have deep pockets and will have done its due diligence on the true value and exposure that Imperial Bank carries, and received a waiver of obligations above an agreed threshold and from additional liabilities, prior to their agreeing to buy the bank. And if such a deal happened, the new bank will want to take on the Imperial customers and business but erase all traces of the Imperial Bank name, forever.

1 thought on “Why Imperial Bank May Not Reopen – Part II”