Look at these quotes about corruption. 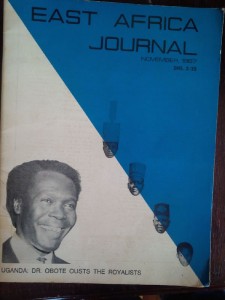 These are now new, but are from an article called Corruption in African Public Life, that was published in the East Africa Journal (does it still exist?) in November, 1967. That issue had Uganda President Milton Obote on the cover and cost Sh 2.25.

While it warned, in 1965, that corruption was the greatest single cause of the fall of governments in Ghana, Nigeria,  and Sierra Leone, it also noted, in a philosophical perspective, that corruption was not East African creation, and that Plato,  in his “Republic” had posed that leaders should not own any possessions except their power, they should live in communes and not marry. Also that, in East Africa, only Tanzania has taken concrete steps to fight corruption, through the Arusha declaration which banned capitalism &  feudalism, the holding of directorships in private companies, receiving more than one salary, and owning houses to be rented to the government.

Re: the quotes above: