This morning Kenya Airways (KQ) released their half-year results. Some highlights from the investor briefing.

• Half-year Kenya Airways revenue was Kshs 56.7 billion same as last year. 90% is from passenger traffic, and  60% of their business is in Africa.

• Kenya’s largest increase in tourists was in 2011, and the numbers dropped in 2012 & 13 with the largest decrease was in 2014, just as KQ added great capacity. JKIA passenger numbers have been flat for the last three years and for the last three months, they have had to adjust their schedule from 24 to 18 hours as the runway is being repaired.

• Half of the airline industry profit is in North America, where strong capacity, consolidation, combined with ancillary revenue and lower fuel costs has had a major impact.  The Middle East has low yields compared to investments, and Africa has 3% of global demand.

• Shareholder equity has gone from Kshs -6 billion last September, to Kshs -33 billion this year and KQ is talking to the CMA on how to reverse this.

• KQ has a turnaround plan, developed with Mckinsey, with 24 initiatives worth a potential $200M, that starts this month.

• Despite fuel cost coming down from Kshs 21 billion to Kshs, 13 billion, the half-year loss went from Kshs 10.5 billion to 11.9 billion 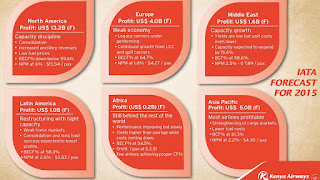 The new chairman of the Kenya Airways board, Dennis Awori, thanked the government, financiers, and suppliers for their support for the airline. CEO Mbuvi Ngunze said that the senate enquiry is ongoing and on Monday, senators will, for the first time, visit the airline.