A few days ago Imperial Bank was closed by the Central Bank (CBK). No one officially knows what was going on, except the board of directors and officials at the CBK.

The Bond: The bond was to achieve 50% of target to be a success (it ended with 101%). The funds raised were tp go towards loans and buy more government securities. Also in the IM was an assumption that the right issue would raise Kshs 2 billion and that Kshs 500 million would be added to the share capital of the bank.

Strong Numbers: Imperial Bank had Kshs 70 billion in assets as at June 2015, up from Kshs 38 billon in June 2014 – 45% growth in a year. Deposits grew from Kshs 39 to 58 billion and loans from Kshs 30 to 41 billion and Imperial had Kshs 16 billion in government  securities up from 12 billion in June 2014. Off balance sheet liabilities were 9 billion including 7 billion in letters of credit, again a very decent position. At the beginning of the year, they had 11 branches in Nairobi, 10 at the coast, 3 in the rift, 1 in central. in Uganda they had 5.

Imperial is the 17th largest bank in Kenya – a solid tier 2 bank, and had 14th highest profit in the country. Imperial has 590 employees, in group (including 490 at the bank) 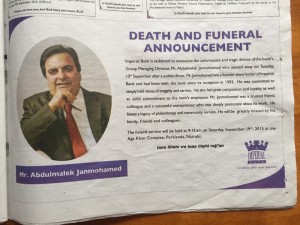 Group Managing Director Mr. Abdulmalek Janmohamed was the Group Managing Director of Imperial Bank and has been with the bank since its inception in 1993. He was instrumental in steering it to a fully-fledged Commercial bank in 1996. With over 26 years’ experience in Banking, Finance and Management, Mr Janmohamed began his banking career as a Management Trainee at Diamond Trust Bank.

Growth Plans: The bank has just opened its 28th branch at the newly reopened Westgate mall Nairobi  with plans to open 3 more new branches before the end of the year. The bank is also on a regional growth trajectory with its current subsidiary in Uganda and plans to open a subsidiary in Tanzania soon.

The group’s internal reporting of business segemental information is shared with the group’s chief operating decision maker. Information reported to the Group’s Chief Executive for the purpose of resource allocation and assessment of segment performance is based on the geographical location of the group

Auditors: PKF audited the IM document, They have also been auditors for the last 4 years 2010 to 2014  and the IM notes that this was a review carried out in accordance with ISRE 2400 as well as a compilation under ISRS 4410 substantially less in scope than an audit conducted in accordance with International Standards on Auditing and consequently does not enable us to obtain assurance that we would become aware of all significant matters that might be identified in an audit.

Insider Loans that were disclosed include Kshs 91 million to directors, Kshs 1.2 billion to associates of director and companies they control, and loans of Kshs 476 million to employees – totaling 6% of loans – which are prudential amounts.

Provisions: From past experience, the management is of the opinion that 1% provision for normal and watch accounts is adequate to cover any accounts which may be non-performing.

Divesting in Uganda: During the year ended 31 December 2014, Imperial Bank (Kenya) sold 36,262 shares in its subsidiary Imperial Bank Uganda to the non-controlling interest, decreasing its shareholding from 63.8% to 58.6%.

1 thought on “Reading the Tea Leaves at Imperial Bank”