It’s been just over a year, since the BRCK team launched their groundbreaking device – a rugged 3G router with Wi-Fi, and 8 hour battery life that’s built to be extended to work with other devices and uses.

From pieces of electronic junk assembled at the iHub a few years earlier, this became a consumer electronics device that has now been sold in 54 countries and the team is now back with the next variants of their device.

The initial device had been extended since with assistance from partners and feedback from users, some of who found that the in-built storage in the BRCK and its micro web server (which allowed users to share content over Wi-Fi) were unexpectedly and surprisingly crucial features.

The groups who showed the greatest interest in extending the capabilities of the BRCK were mainly in the education sector – comprising education providers who had content, but had challenges delivering it at schools around the world which had the challenges of electricity, internet, device failure etc. With the support of Mozilla Foundation, they were able to develop the BRCK pi – in which a Linux server was added to the BRCK, enabling content to be shared, even with zero connectivity.

Nivi, who was a co-founder of eLimu learning tablets, and who’s now the president of BRCK Education spoke of the inspiration and challenges that eLimu went through in delivering digital education through sharing text-book content in a digital format – with the main problems being uploading new content and the fragility of the imported tablets. But with BRCK content cached locally, they were able to update several eLimu tablets overnight.

BRCK was launching two devices today in Nairobi that can be ordered at the BRCK Education site: 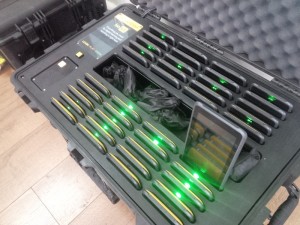 #BRCKEducation has partners at JP, Intel, Pearson, Eneza education, KnowZone, eKitabu, eLimu and Kenyatta University. It also has Chase Bank as a finance partner to enable schools to acquire Kio Kits at Kshs. 46,000 ($460) per month.

More on the launch and products here and here .