Last weekend, I took a trip to Mombasa and the Mineral Sands site that Base Resources is mining in Kwale County. Through Base Titanium, the firm has been keen to engage with media, in the complexities of the mining industry that has many components – legal, taxation, land, financing, community, procurement environmental, jobs, fairness/equity, value addition etc. To compound this, it is very capital-intensive with very long payback periods that are a challenge for most investors. 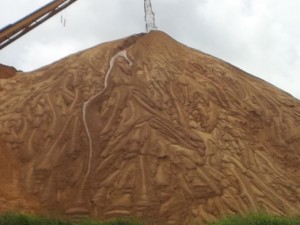 Parent Base Resources is a company that’s listed in Australia and the United Kingdom exchanges, and that requires that they share voluminous financial information with investors and the public periodically. The company has also signed up for the Extractive Industries Transparency Initiative (EITI) in which companies commit to sharing information to show their impact – and, to date, Base, has paid  $51 million to the Kenya government including $27 million in value-added taxes (VAT), $18 million in utilities, and $3 million in royalties.

Base have three sites within their 4,000-acre Kwale lease and turned over 9 million tons this year of earth, of which 8% was subjected to further extraction. This resulted in 751,000 tons, comprising three minerals products – 472,000 tons of ilmenite 472k tons, 71,000 tons of rutile, and 22,000 tons of zircon. The minerals are then trucked 30 kilometers to a $30 million dock they built in Likoni that faces the entrance to Kilindini harbour where they have a loader capable of getting 1,000 tons per hour onto a docked ship. 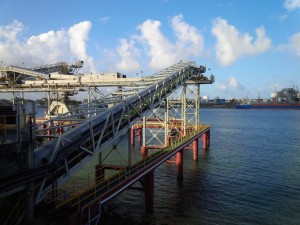 Base ship loader at Likoni

Base has been challenged by the current Kenya Mining Cabinet Secretary (CS) on their impact in the country, and to which they have publicly responded to claims he’s made, mainly about their tax payments, investment and licensing.

The CS has also tried to raise their royalty rate from the 2.5% in their mining agreement to 10% of revenue, a figure which the firm terms as unrealistic given that even advanced mining markets like Australia peg it at 5%. Here in  Kenya, they have borne additional costs of investment like having to build their own infrastructure like roads, dam, electricity lines and, dock. 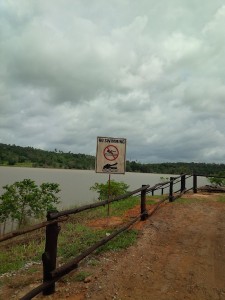 The increase in mining royalty is one that has made Kenya rather unfavourable for mining investors at a time when global prices for all commodities have dropped. There is also a Mining Bill that’s almost been completed after a prolonged session between both houses of Kenya’s parliament. The bill sets out a path for investing in the mining sector. Base is happy with the bill but concerned about some clauses such as a requirement to list in 3 years at the Nairobi Securities Exchange and a requirement that old depreciated mining equipment be transferred to counties. The uncertainty about Kenya as a mining investment destination has been reflected in the latest Fraser Report which saw the country drastically near the bottom of Africa and the world rankings.

Their main counter to the Minister’s charge is that the impact of mining to the economy in Kenya is much greater than that of the mining royalty, and if the government tries to extract too much revenue, they will lose investments – and indeed that exploration activities have severely reduced now. 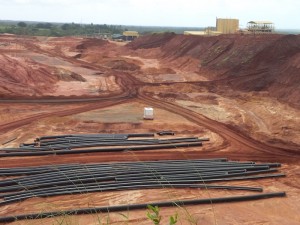 They try to employ as many locals from the mining area, then Kwale (60% of residents are from the county), and the greater Mombasa, and then the rest of Kenya. They commissioned a study that found that the 600 site jobs had a multiplier effect through support industries for a total of 3,200 jobs. During construction when they spent Ksh 26 billion, of which 1/3 went to Kenyan companies and that Kshs 3.2 billion goes to Kenyan suppliers every year. Some of the large suppliers include Kenya Power ($9 million a year) and Multiple Hauliers who competitively won an international tender to truck the base products to the Likoni dock. 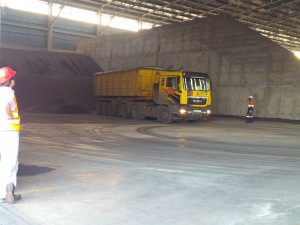 Base storage at Likoni

Base, who pay royalties of Kshs 240 million now account for between 1/2 and 2/3 of Kenya mining sector of royalty revenue and have enabled mining to overtake coffee as 4th largest export. The 444,000 tons of minerals sold earned Kshs 12.3 billion in sales. In addition, the $60 million worth of infrastructure the company has invested will remain here after a mining lease in exhausted. 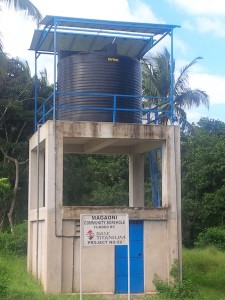 Base community borehole at a school

The company has also undertaken dozens of projects in the community area of the mine. These include agricultural projects to get commercial farming going, vehicles, rehabilitation of schools, water projects and construction of health facilities to meet the needs of area residents.

It was an interesting visit and it was nice to see that the company has largely accomplished what it set out to do when it took over a project that had stalled for many years. The global market for oil, goal, and commodities has also declined sharply since they started, mainly driven by slowing demand from China and that has not altered their plans. 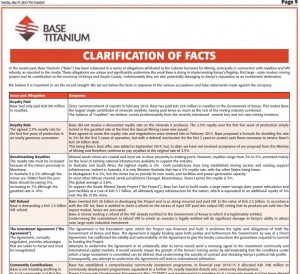 For now, here are few Kenyan shareholders in the foreign-listed company as mining is still not considered a prime investment, compared to real estate where local insurance and pensions companies can easily double their money in a few years. Still, Base continues to engage with these large investors with a view to building up a local shareholding.

Kenya has ambitious plans for the oil, mining and extractives sector as seen in the mining bill that should soon become law (but which does not include oil).  Base is internationally viable with its pricing structure and it may attract similar investors and projects to Kenya.

1 thought on “Visit to Base Titanium, Kwale”