The EastAfrican newspaper is celebrating 20 years of circulation and publication around East Africa. The weekly from the Nation Media Group (NMG), is a favourite read, either online when stories go up over the weekend or on Monday in the office. On the occasion, we’ve learnt a bit about the newspaper which is distributed in all the East African countries. While, today, it may seem right in step for the times when regional economic integration in Eastern Africa is the central focus of many governments, trade, and political efforts, the newspaper was conceived at a time when Africa was still considered the dark continent.

We’ve learnt that it was the brain-child of the Nation Media Group’s principal shareholder, The Aga Khan who conceived of a newspaper that would promote regional integration. Writer Gerry Loughran recalls that as far back as 1970, the Aga Khan had expressed the wish for “at least one prestige publication of high quality circulating throughout East Africa”.

The choice of the title, omitting the “Nation’ was to de-emphasise the Kenyan-ness of the newspaper and the layout broke away from the successful look of other NMG papers and omitted a valuable front-page advertisement space. Others were the decision to make it a stand-alone weekly, and not a daily paper as that would require a lot of resources.

Among its first hires were two people who later became legends in their fields; the prolific Charles Onyango-Obbo who’s now the M&G Africa editor, and who still writes for the EastAfrican and the Nation and John Githongo who went on to lead Kenya’s anti-corruption efforts to their highest position before that all fell apart. The EastAfrican has had 7 managing editors including a lady, Pamela Sittoni.

Its launch was planned to coincide with the revival of the East African community and promote regional integration efforts. Indeed it told many positive stories of Rwanda post-1994.

That it has done and continues to this day. It’s the place you go to read long-form stories on different aspects of East African life. While most newspapers will still have Africa news buried within the single page devoted to world news, the EastAfrican leads and is full of stories that originate in any of the East African countries – whether its presidential term limits in Burundi, the Kwibuka20 events in Rwanda, the morphing of sea piracy into bush terror in Somalia, oil prospects in Uganda, a new brewery or railway in Ethiopia, the recycling peace talks of South Sudan, etc.

Amid all this is its coverage of business events. It’s probably the only newspaper that has had an analysis of the Crystal Telecom IPO in Rwanda in which all East African nationals will be able to buy 20% of MTN Rwanda. (Oops that closes today – when this post is published). They also have a healthy coverage of arts, travel diaries, literature, featuring pieces from Kwani and award-winning young African write 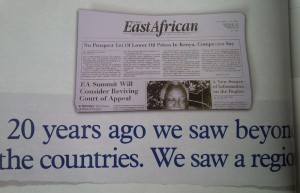 The Nation Media Group AGM takes places today and the shareholders’ report notes that The EastAfrican newspaper had profit growth of 7% in 2014. Salute, to twenty more years.