A few weeks ago there was an odd debate by thousands of people in many countries over what color a certain dress was – “White and Gold?” , or “Black and Blue?”.

While the dress debate rages on, there are similar debates are going on in the Kenyan judicial system. If you attend a Kenyan court, and hear lawyers for two sides argue, they will say polar opposites of each other. E.g a bank lawyer will say that Person A has defaulted on a Kshs 10 million loan and they want to sell his/her house. In reply, the lawyer for Person A will deny that he knows the bank, or took a loan from the bank, and that there is a fraudulent attempt to sell his house. 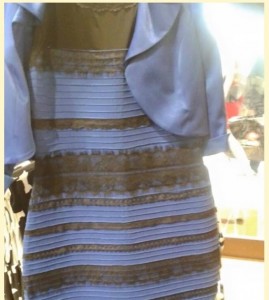 Or in the case of the Tatu City, you have two groups of directors saying totally different things. One side calls the others fraudsters who have never put a cent in what is a billion shilling project, while the other  side says that foreigners want to deprive them of a rightful stake.

The truth is usually somewhere in between in these cases, but why do antagonists, through their lawyers and affidavits retreat to polar opposite sides ahead of court? This forces a judge to  wade through months or years of volumes of evidence and documents in order to arrive at at a Solomonic decision that may reflect the reality, or a sense of fairness. Not the truth.  In these drawn out cases sides are given injunctions and orders that prolong, and make the ultimate decision, needlessly more expensive.

Could a lot of cases be settled faster, and less time lost in the courts? There’s no need for Solomon in every case.