It’s been a year and a half since the last elections, and a year since parties last published financial accounts of their performance. They are now doing the same for the 2013-2014 year and with numbers in from  most of the ‘major parties’ – what’s changed and what trends are there to see?

1. Party in the Big Tent: Of the 349 parliamentary seats contested in 2013, the two coalition groups of Jubilee (comprising TNA [which won 89 seats] and URP [75 seats]) and CORD (comprising ODM [96 seats] , Ford K [10] and Wiper[26]) bagged a majority of the seats in Kenya’s 2013 parliament – and thus keep almost all the funding from the taxpayers Political parties Fund. But since Jubilee and CORD are not coalition,  the funds are directed to the member parties. TNA, which did not exist the year before, now lead the political party finance fund list; TNA got Kshs 77 million and URP got Kshs 40 million, trailing ODM that got Kshs 78 million (ODM is slightly up from Kshs 73M in 2013). 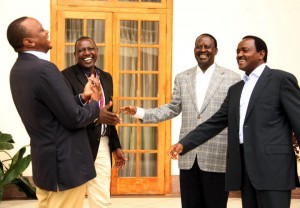 3. Being in a Coalition Pays: Wiper’s accounts note that the party received Kshs 11.8 million funding from their coalition partner (assuming ODM ). Oddly, Ford-K, another CORD coalition partner, did not get any and seems totally dependent on its elected leaders  – with their Senators and MP’s contributing about  Kshs 4.5 million of Ford-K’s Kshs 4.7 million income for the year.

5. War Chests:  TNA, Wiper, and URP all appear to be building war chests for future operations and elections. As at June 2014, TNA had Kshs 29 million in the bank while both URP and Wiper had about Kshs 15 million – and ODM had  1.6 million.