There’s a lot of talk about removing intra-African trade barriers. But how about barriers for Africans traveling within Africa? If it’s easier to travel, it will be easier for people to cross borders, see & seek opportunities and build trade & business networks. But what stops more of this from happening? Here are 5 angles.

1. Airline costs: Airline travel is quite expensive, even for very short flights like $350 for the one-hour Nairobi-Entebbe flight. This is largely due to national taxes, that form more than 50% of the cost of some tickets. 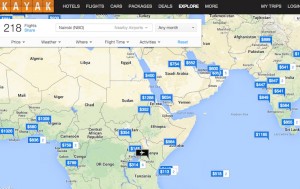 Costs from Nairobi to various cities, priced by Kayak.com

2. Visa restrictions. Nigerian-born Aliko Dangote, who is believed to be the continent’s richest man was recently quoted as saying “I need a visa in almost 38 countries, which means an American has more access into Africa than myself.” Two years ago, tiny Rwanda made a bold move by allowing all African nationals to be issued with visas on arrival in the country, bypassing the embassy application process that is expensive and bureaucratically burdensome to access many countries.

3. Unfriendly Currencies. To travel and trade across Africa, and many parts of the world, the US dollars is crucial, as no African currency gets respect across its borders. You might be able to exchange it in a country that has lower forex restrictions, but at what cost? Looking at the currency spreads in the bank hall today, the differential between buying (Kshs 90) and selling (Kshs 84) the US dollar works out to about 7%, which is also the same for the Sterling Pound and the Euro. But for African currencies, such as the  South African Rand (bought at 6.69 and sold at 8.93), it’s a 28% difference, and for the currencies of Tanzania its 54%, Uganda 93%, and Rwanda 96%. Somewhere in-between is Asia, with the UAE Dirham at 17%, Indian Rupee at 15%, and Japanese Yen at 16%.

4. Knowledge Gap: There’s still very little knowledge about the greater Africa beyond their borders by African country nationals. I try to follow at least one current affairs, and preferably business-related, African national on twitter, but there are still many countries that I can’t find people to follow, and learn from. The best news source on Africa I’ve found is AfricaLive, the one-hour daily news nightly programs on China’s CCTV Africa channel.

5. Poor Road networks. If it’s tough to fly, it equally to drive across the continent and cross its many borders with varying degrees of red tape. Today, I saw these quotes by @mmnjug on twitter ” DRC is the world’s eleventh biggest country at over 2.3M sq kMs,and an estimated 73M people, but has only 2,250 kilometres of paved road. In the past two decades, just two people are recorded to have crossed the DRC over land, their journey took 44 harrowing days in 2008.”