This weekend, the National Social Security Fund ran an advertisement in the newspapers clarifying amounts that employers and employees will pay now that  changes to the NSSF act are legal.

Earlier media, and social media, reports had NSSF taking as much as 12% of an employees earnings. But the NSSF ad introduced the phrase pensionable salary on which the deduction is based – so it’s a percent of Kshs. 18,000 (pensionable salary) and so if someone earns Kshs. 100,000 ($1,175 per month) and their employer has no current pension scheme, their deductions are: 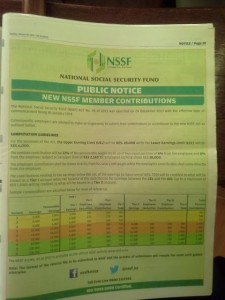 So total payment for that employee, that an employer will remit to the NSSF is Kshs 2,160 – and not Kshs 12,000. This still amounts to a payment that is five times what a typical company was making to the NSSF last year (Kshs 400 per month, per employee)

From a note at Alexander Forbes Financial Services: The effective date (of the NSSF Act) was 10 January 2014, literally giving employers no time to apply for the opt-out. They thus will have to remit both Tier 1 and Tier 2 contributions to NSSF until the opt-out is granted…also that these amounts will increase each year for the next 5 years.

EDIT – Jan 21: The Government has deferred the commencement of the new NSSF Act to the end of May 2014. This means that the contributions to the fund will be made at the old rate.  Read more.