Updating previous visits by @Honoluluskye and @kkaaria, here are more travel tales from Dakar  and Mauritius  by @kahenya and @carolmusyoka respectively
Dakar
Getting There:  My best bet on this would be to fly from Nairobi, through Addis to Bamako and then on to Dakar. Its a more comfortable ride than Kenya Airways (KQ) and from what I heard, has better quality of inflight services. KQ was delayed at take off and was not really worth it. Cost of the ticket return is about US$ 1400 + tax.
Senegal now has an Embassy in Runda, Nairobi – and it’s mandatory that you obtain a visa here, or you’ll get turned back in Dakar. The visa process is not really complicated, but also accept that there are numerous delays at the embassy, and book way ahead of your travel (about  3 weeks. The cost for the visa (for under 30 days) is Kshs 1,750 for Africans and Kshs 3,500 for non-Africans.
On Arrival: In Dakar, getting out of the airport was fairly easy; they scrutinize your visa and picture to ensure that it is you, but once you get your passport stamped, you are good to go. It took about 45 minutes from getting off the plane to getting into the hotel. There were no unexpected taxes or fees, and the cost of a taxi back and forth between our hotel, and the airport was about US$ 15.00.
Getting Around: I stayed in the hotel where the conference was so there wasn’t much commuting taking place. There are numerous ways to get around, from what seemed to be a well-built bus service, but more  common were small taxis which are very reasonably priced for the distances covered.
Bring your French with you, and it will get difficult, so its always best to get the hotel concierge involved if you are uncertain about where you want to go, but for the seasoned traveller, walk out of the hotel, walk a bit of a distance and then flag down a taxi and you are guaranteed to get reduced rates. Walking is also a good way to get around, and I did that a lot, in the evenings when it was cooler. 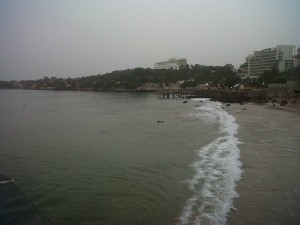 Not once, did I feel insecure about walking around at night, and I did walk out as late as 1.00 AM. I was told to mind vendors who can be very pushy but that was it. I could not quite remember being warned about crime and did not see anything happen. Its quite a peaceful place.
Social Scene: For something good, expect to pay about US$ 200+ per night thought it may get affordable. In 3 days, electricity failed once for a few minutes and that was it. I ate dinner out twice, which cost about Kshs 1,000 per meal. There was a lot of fish involved, and rice. I randomly picked meals and they were quite good.
I used a bit of extremely bad French and English. I did not ever once run into an English written publication. Everything was French. A lot of the Senegal people I met were more interested in telling me where their fabric shops were and talk about Gorée Island, but besides all that, did not quite talk much else. When it comes to Agriculture, I watched a news clip one evening, and if my French was right, the government was encouraging people to focus more on agriculture and was going as far as creating access to clean and safe water for consumption and agriculture.
Stay in Touch:  Making calls was a very easy. I bought a SIM card from Orange/Sonatel, put it into my phone, waited about 30 minutes for it to be activated and that was it. The network also has monthly BlackBerry packages, but it seemed overkill to buy that for 4 days.  Roaming from Dakar is expensive, hence the choice of buying a local SIM-card – and if you save your numbers in the + {country code} {number} format, it is as easy as dialing as if you are at home. Call quality was ok, but sometimes sounded poor as most of their international calls are routed through VoIP.
Calling from Senegal across Africa and overseas seemed to be affordable, possibly the most affordable city in Africa! I topped up about Kshs 850 ($10) and that was more than enough for me to call Kenya, South Africa, China and USA every single day for a few minutes and text non-stop. I also managed to find the Tablet Cafe at Medina set up by Google which was impressive and the hotel had very good Wi-Fi hotspots that allowed for Skype access.
Odd Points:  The Senegalese are a bunch of really nice people, very warm and affectionate and really go out of their way to make you feel at home. What I found odd was that they also workout a lot, and right outside the hotel, you will find local joggers every morning and evening – more than I have seen anywhere else in the world. A taxi driver pointed to some senior government official going for a jog with 2 bodyguards one afternoon.
Somewhat related, the Minister of Communication, Telecommunications and Digital Economy, Cheikh Abiboulaye Dieye, impressed by arriving on time to give his speech, and then keeping to the allotted time without diverging into political rhetoric or making outlandish statements.
Going to Gorée Island had to be the highlight of the trip, seeing the actual guns used in the making of the movie, The Guns of Navarone, which were actual forward artillery pieces during World War II made it just about the best thing there is to see, but also learning (and seeing) about what slaves had to endure before being shipped off to the New World. Even the movies we watch today have nothing on the reality of what really happened. 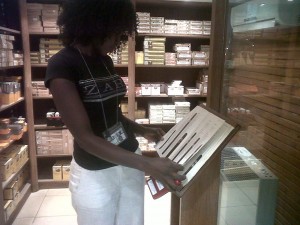 Shopping & Sight-Seeing: There are many European style malls – like Sea Plaza which was right next to the hotel, which put places like Westgate and Junction to shame,. I guess many of this malls are there due to the proximity to Europe and actual real focus on investment as well as French and Arab influences which are easy to see. It shocked me that things there are quite affordable even in malls, unlike Kenya where buying some things seems to be a compromise if you are buying for a mall. I bought a lot of fabric and art work, as well as some books to read and catch up on my French.
I spent about US$ 500 for shopping and stuff, managed to get a bit of bowling done, went out for drinks and a cigar at some fancy lounge and stuff like that.
Biggest surprise about the Country? Honestly, after watching news clips about Dakar, I expected a downtrodden backward country, but that was not the case. Dakar is a beautiful and fairly well developed country. There were times you could not distinguish between being in Dakar and being say in Corsica or Ibiza due to the Mediterranean atmosphere. Their Duty Free was also very impressive, featuring a tobacconist where obviously, I had to make a stop and shop.
Mauritius
Getting There: You have two options; Nairobi-Madagascar via Kenya Airways, then Madagascar-Mauritius via Air Mauritius or a direct Nairobi-Mauritius flight on Air Mauritius.  Though direct flights are only on Saturday, Tuesday and Thursday, it is preferable as Madagascar is horrible, and can take up to five hours during which you wait in a room without food and drink. Tickets cost about $700
On arrival, there is no visa requirement just a yellow fever certificate requirement. It was a very busy immigration area but the officials are friendly.
Getting Around: There is a public transport system and taxis are available, but i didn’t use any as ii was at a conference. I also felt pretty safe getting around. They are insane about speeding and there’s deep respect for speed limits in designated zones as there are traffic cameras and strong penalties for breaches.
Communications: Do not use Safaricom roaming…..horrifically expensive. the hotel i stayed in was all inclusive and had Wi-Fi but it was very slow.
Social Stuff
– English is widely spoken. French too and the Mauritians are exceedingly friendly!!!
–  A good hotel will cost about 100 euros all inclusive and the electricity was quite reliable
– In terms of food, there is lots of Indian influence so a staple is rice and curry.
Shopping & sight-seeing: Port Louis market and Gran Baie lovely for shopping and hanging around – and there is plenty of tourist stuff to do like boat tours, swimming etc.
Biggest surprise about the country?  How small it was – 65 kilometers long and about  45 kilometers wide