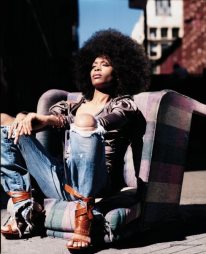 Last month there was a bit of debate about the reception of international concert stars who perform in Nairobi. @KenyanPoet  wrote about the live concert business and the value Kenyans give it noting that, while the James Ingram concert in Nairobi attracted 500 fans, a Rick Ross concert in Tanzania attracted 22,000 fans, and Konshens in Uganda drew 25,000 fans.

Another equally interesting perspective came from @ItsBuddhaBlaze who wrote on twitter about the challenges that concert promoters go through in order to bring international musicians to perform in Nairobi. Some of them (nicely archived here)  include:

We trust that the promoters of the Erykah Badu concert won’t go out of business..or incur a loss. Her concert is sponsored by giant brewer East African Breweries’ @TuskerLite brand. She’s a world-famous artiste who has toured extensively and has a strong track record of award-winning songs like Window Seat, On&On and Tyrone – and the promoters should come out ahead if marketed right. Still, it should be easier to bring more international acts to Kenya.

EDIT: Apparently, promoters of other US stars including Keri Hilson and Chris Brown are also scheduling concerts for December 2012 in Kenya.