Ethiopia has a very positive economic outlook and yes, it has a lot of development going on, but is this sustainable, now that the linchpin (Meles Zenawi) is gone? The one thing that is universal about the entire continent is that the poverty line seems to grow every year, sometimes it shrinks, but only for a moment. The cliché remains, that the rich are getting richer and the poor are getting poorer and there is no true middle class –  and if there is, it’s only based on people who don’t want to imagine that they are less than middle-class. 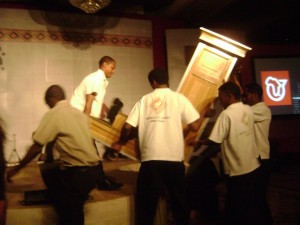 Africa is the kingdom of billion {insert any local currency here} projects. Ethiopia also finds itself in the same quagmire, except for one thing. They are actually making it work for their benefit. In Ethiopia, construction and infrastructure development are at an all-time high. It was necessary for this to happen until Meles Zenawi and his beloved Ethiopian People’s Revolutionary Democratic Front (EPRDF) went their separate ways, much to the disadvantage of EPRDF. Zenawi’s rule transited between dictatorship and benevolence and it was working for him and Ethiopia. Love him or hate him, from being out in the rebel trenches to donning a suit, Meles was every bit a tactical genius. He grew Ethiopia from a war-torn country to one of Africa’s fastest-growing economies. Only Meles could conjure up infinite possibilities – sometimes by sheer cunning and sometimes by sheer fear.
EPRDF needed Meles to live long enough to get to his end game which would have allowed EPRDF to focus on less ambitious but more people-driven development. That did not happen. With him gone, and an open democracy on the horizon (since every linchpin’s death or retirement is followed by internal crisis and eventual dissolution, with less political tolerance by the citizens), with a lot of projects still incomplete, and with Ethiopia still facing many financial challenges, the positive economic outlook has quickly shifted from “going to happen” to “may happen”.
EPRDF has moved from the strong offensive to a sullen offensive-defensive. Push-Pull. Addis, like Luanda, Angola, defies Economic Science. If you buy a vehicle in Ethiopia, when you sell it, even years later, the value generally appreciates. Rents and property rates are astronomically high, coming close to rivaling Luanda – a huge developmental Achilles heel.
The key driver of such high rates is the presence of diplomats and NGOs who have an unending well of money – and this is where the very living ghost of Isaias Afewerki (President of neighbouring Eritrea) comes to haunt Ethiopia. Eritrea, despite being poor, is not dependent on Foreign Aid or NGOs. They have that to pride. For Eritrea, there are no illusions. Poor is poor so the only way is to go upwards – on their own. Ethiopia lacks that. Instead, they have to endure a very faint cushion, one that is rarely successful except in dire times. Unless Ethiopia starts equal distribution of development in the small business sector and begins to really crack the whip on poverty alleviation and shakes off its dependency on NGOs, EPRDF could find itself in a lot of trouble – just like the ANC is, despite them trying to conjure all sorts of ghosts, from Jacob Zuma’s incarnation of Umshini Wami to the very living ghost of Nelson Mandela. Nonetheless, Ethiopia’s economy is about to get a very shocking reality check.
Tweets by bankelele