This is a book about the people and history of what was Kenya’s largest town in the 1940’s but which, despite a boost in World War II, was ultimately in a state of economic decline with the end of slavery, impact of the great depression, and emigration of many of it’s leading people south to Mombasa in search of better opportunities.

–The rare book also dwells on many aspects of the economy, rule and people of Lamu; how the lack of slave labour, disruption by ex-slaves, land tenure, mortgages & inheritance affected the mix of residents in Lamu that comprised Arabs, ex-slaves, Indians, homosexuals, and later German, South African, and Nigerian soldiers (in the two world wars), and Mau Mau prisoners etc. who all interacted and engaged in varying trade and agricultural patterns that were based on retaining links with Zanzibar until after WWII.
This was over-seen by the British Colonial government that tried to collect all manner of taxes from the residents to support the government, but with varying degrees of success (some locals even played the race card to avoid taxation). 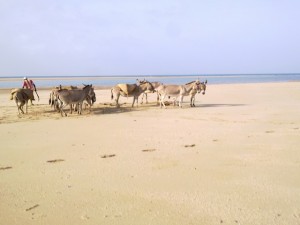 The British suffered a high turnover of local administrators as it seems they were seduced by the breezy town – but managed to introduce medical care, formal schooling and collect data on the island with some startling finds –  like the high ratio of women to men in the 1930’s and 40’s (women out-numbered men by 3 to 1) and also the (high) marriage to divorce ratio in Lamu.

The book is just 310 pages long, but 80 of those comprise the appendix, notes bibliography and index and that is and a rarity as many books now published in Kenya don’t properly attribute their reference sources.