Kenyan businessman Naushad Merali, known for his Sameer Group investments in banking, telecommunications, manufacturing, agriculture and other sectors, gave a talk at a new Entrepreneurs Club event on Thursday. He briefly spoke about his business life and then took part in a Q&A session. 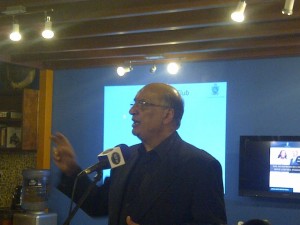 Merali spoke about how he grew up in Mombasa, and would take a bus twice a month to sell Indian sweets in Moshi to pay for school fees. And then worked for a few years at Ryce Motors as an accountant, he was able to buy it out from the owner who was retiring and also convince Daihatsu that he could sell their short wheel-base vehicles in Kenya, landing their franchise.

(Think) Big: when he signed the deal to buy first American bank in London, Merali did not have the money, but by the time he flew back to Nairobi people had heard and were amazed and want to partner with him – so by the time it came to conclude the deal, he had a cheque to pay.

Same with Kencell – when MTN bought out Vivendi they were sure that they’d get their way and he would not be able to match their offer, but he chose to exercise his preemptive rights and spent 15 days flying around during which time he got funding from Celtel.

Exits: Don’t get emotional about owning a business, and know when to cash out. Selling out, and getting liquidity and value for all your hard work is the only way to grow. e.g. He took money from communications and put it into the fibre cable business.

Give Back: Do this and you’ll get back more. He’s done this by listing his shareholdings, the creation of the Jaffrey Sports Club on prime land that is free for all the public to use, and other philanthropic activities that his wife manages.

Growth: Diversify, but don’t take money from one business to put it in another one. Grow each one with its own capital, and if one fails, it goes alone.

Opportunities (Take advantage of): On a flight, he sat next to a man who he conversed with and found that was trying to sell his company called Sasini. He had no idea about tea and coffee, but shook hands and had a deal.  Same with his IT investments did not know much

Also, when President Museveni told him that farmers were pouring milk because there was a shortage of milk processing, he set one up and expanded the capacity of the country to process milk many times over. 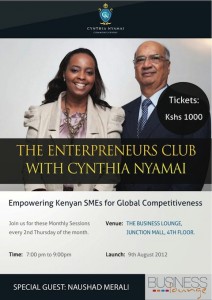 Partnerships: Choose the right partners – business partnerships are harder to break than marriages and you need partners who align with your vision for the next few years. He found that his new South African partners had a different style than him so he cut back his internet interests.

People: Kenya’s greatest resource is its people – hardworking resourceful staff. He mentioned how he motivated his salesmen at Ryce Motors, by giving their wives cheques to hold, that would only be signed if their husbands sold enough car volumes.

Also, he is very protective about creating and retaining jobs for workers (the Sameer group now has 24,000 staff). He said when Firestone chose to stop manufacturing their brand in Kenya (and shut production), he bought them out and created a new brand – Yana.

Succession: On business succession – life is finite, and many businesses here won’t last more than one generation because of secretive management styles, unlike those in developed countries that last hundreds of years. He advises that you bring your kids into the business open your books share your secrets, but don’t hire relatives as they are very hard to fire, and can cause domestic stress and lawsuits.

Technology industry (The problem with tech..) is that companies require continuous investment year after year – so tech entrepreneurs should know when to take on new partners and funding, perhaps giving up a little equity to like-minded partners, if they are to grow.