The Economic History of Kenya is a collection of essays put together by William Ochieng and Robert Maxon. It also features essays by R. T. Ogonda, George Ndege, and links to other writers like Bethwel Ogot, Anyang Nyongo, and Godfrey Muriuki with references to their sources.It shows how from the colonial times to the present, government is crucial to development in a complex set of ways. It also teaches that infrastructure, whether it is railways in the 1910 or fibre cable in 2010, can have a great impact on development. It also shows the importance of collecting economic data and the value of research undertaken years ago by these hard working writers.(EDIT Via @RookieKE On September 3 – The University of Nairobi (UoN) bookshop has 8 copies of the ‘Economic History of Kenya’ for sale at Kshs 1,000)

– East Africa meat commission was set up to destock animal populations in Akamba areas (100). Later the Kenya Meat Commission was formed in 1950 to do the same, but it collapsed (102)
– Chief Koinange of Kiambu was the one of the first Africans to grow commercial coffee, but he was frustrated by European settlers (83)
– White maize was brought to Kenya from South Africa to help feed African labour on settler farms (122)
– Growing maize and beans was a pre-colonial innovation in Kamba land – as were others in Kikuyu (planting yams around tree stumps), and Luyia lands (use of manure, crop rotation) (77)
– At times of shortage in 1942, the government was engaged in maize buying, but at different prices from settlers (who were paid higher prices) and African farmers – but trade measures like this may have contributed to African nationalism in coming years (214  &  217) 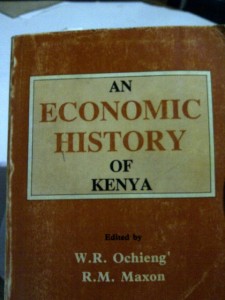 – Africans traditional industry was pre-colonial and included the  production of hoes, spears, knives, pots, baskets, fishing boats – and these were put in check by the introduction of western industrial technology (159)
– Colonialism was a sudden, not well thought out, planned or universally popular move in European nations (56, 57)
– Britain compensated Sultan of Oman for the abolition of slave labour in Zanzibar by enabling him to sign commerce treaties with the USA (1833), and France (1844) (58)
– Colonial rule lasted 68 years in Kenya from 1895-1963 (171,201), but  the structures it created are still in place and the neo-colonial state, while being a bad name, is a modern reality (259)
– Areas that had missionaries, tended to get more colonial government development (269)

–  The British Imperial East Africa company introduced the rupee as currency in 1888 and it was later adopted by the government in 1920 (249). However, the currency depreciated during in the war and was never liked by settlers who objected to ties to British India and they pushed for a British currency based on the gold standard (250). But the move to a new gold sovereign currency in 1919 was opposed by the three British banks in East Africa – National Bank of India, Standard Bank and National Bank (SA) as they had invested and lent based on the rupee; a compromise was reached in the form on an East Africans rupee (later called a florin) that would replace the Indian rupee in 1920, however the florin was not widely used (252)
– Banks that financed settlers between 1919 and 1935 included merchant houses like Mitchell Cotts, Jardine Matheson Co. and John Gillat Co. who bought settler crops and sold them on world markets at interests rate of 25-30% (125). Banks in Kenya in the 1920’s and 30’s included Standard Bank of South Africa, National Bank of India, and Barclays (called Dominion Colonial & Overseas) – who advanced credit towards large-scale import & export commodity production (209, 254). They gave very little loans to agriculture and industrial development (255) as they were averse to long-term lending in Kenya where land security, which was the only collateral, was not assured. This reluctance to lend continued until a Land Agriculture bank was set up in 1930 make mortgage loans to settlers of up to 30 years at 6.5% and also repaid existing settler debts (African were excluded from these) (256)
– Funds to buy lands from settlers were raised from the World Bank (IBRD) and Colonial Development Corporation (268)
– ICDC was created in 1964 to provide Africa finance and participation in industry (267)
– Even after independence, there was an east Africa currency board in London that determined monetary policy for East Africa (448)

– The Railway was expanded to assist settlers’ agricultural productivity (Nakuru to Turbo, and Thika to Nyeri, Nanyuki, Nyahururu, and Solai) (116). But the settler economy was not productive enough, and ran deficits; hence the needs to encourage African produce and later as much as 75-90% of the colonial agricultural exports came from African farms (81)
– Britain had no interest in industrializing Kenya until WWII (70, 164)
– Asian traders were encouraged to go into business by the colonial government – and were more resilient than European traders. They started with little capital but using thrift and wholesale-retail credit relationships grew to a point that, by 1905, Asians owned and controlled 80% of the business capital in Kenya (207)
– After independence, the government had a New Projects Committee which reviewed applications of foreign companies wanting to invest in Kenya in 1968 and a Capital Issues Committee in 1971 to cut down on capital outflows from Kenya (304)
– The World Bank advised devaluation of Kenyan currency to promote exports and these happened from 7 to 10 shillings against the dollar in 1981 and after a few more to 23 shillings against the dollar by 1990 (308)

– Government land buying schemes to get land from settlers after independence included Harambee, Haraka, and the Million Acre scheme (274) but it was clear that the agriculture cooperative farm model did not work (275)
– Land tenure included freehold and leasehold – and the crown land ordinance increased the lease period from 21 to 99 years (114)
– Land price inflation was seen in 1915 when land leases were extended from 99 to 999 years and settlers applied for more land – even in names of their wives & friends (115)
– Settlers had large farms, averaging 2400 acres per settler in 1932, but had to get Africans to work for them (261)

– A.M Jevanjee started the African Standard in 1901, and in 1905 it was bought by a European who renamed it the East African Standard (137)
– The need for newspapers that had an African interest was largely filled by the East Africa Newspapers Group founded by the Aga Khan in 1959 and its main publications including the Daily Nation.
– Vernacular newspapers at the time included Wiyathi (1960 – Kikuyu language) weekly, Ramogi (1992 – Luo weekly), Jicho (Kiswahili 1962) and the Colonial Times (1962) which was an Asian weekly (137). With assistance from UNESCO, the government in 1974 published newspapers like Sauti ya Gusii, Sauti ya Kericho, Sauti ya Pwani and they were successful to a point that there were plans to have them in every province (325)

– The first bitumen roads were the Nairobi-Thika and the Nairobi-Nakuru roads, both in 1946 (133)
– When flooded, Tana River can be navigated 500 kilometres upstream from the Coast (134)
– KENATCO, a cooperative with 9,000 members was very successful with profitable routes to Zambia, Angola and Rhodesia until East African problems led to them not being allowed to carry heavy vehicle freight through Tanzania, and that government’s detention of 1/3 of their fleet (321)
– Matatu’s came about in June 1973 when President Kenyatta decreed that they were exempt from licensing. While they had some problems, they provided the government with solutions to unemployment and facilitated Africanization of the transport sector (322)
– The railway impacted trade patterns, reducing the freight cost from Mombasa to Lake Victoria from £130 per ton using human porters to £10 per ton (138)
– East Africa Railways & Harbours was Africa’s second largest rail system and was financially healthy till the 1970’s (314-316) when road completion and policy changes added competition.
– Aviation started in the mid-1930’s with landings on Lakes Victoria and Naivasha. The first land aircraft was at Wilson airport, which was named after Florence Wilson (134)
– East African Airways blundered by making loss-making flight routes to the US and the Far East (and which were withdrawn in 1970) (318)