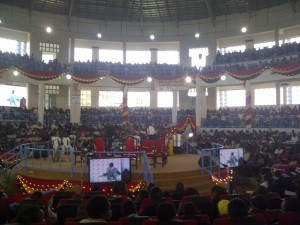 About 5,000 children from across Kenya have assembled to hear talks from business, social, and other leaders from Kenya and other countries. They are beneficiaries of Wings to Fly which offers secondary school scholarships to top primary school kids, and the University Sponsorship Program, that offers university scholarships. The financial and mentorship programs are supported by the Equity Group Foundation, and the MasterCard Foundation with support from USAID and UKAID.
This year #WingstoFly is sponsoring the high school education of over 2,000 boys and girls (20 per district who applied at their local Equity bank branches and were selected by their communities).
For another group of 250 who topped their districts in KCSE (national high school exams) in 2011, the University sponsorship program will be supporting their education and Kenyan and overseas universities, including for a few who will be starting at Harvard, Yale, Brown, Princeton and Columbia universities. Over 1200 have benefited from this including Samuel Kirubi, who was the first beneficiary of the program in 1989 and is currently the Managing Director of Equity Bank Rwanda.
The mentorship session includes an annual event in Nairobi while many beneficiaries also mentor others within the program.  A session yesterday on innovation had Anthony Mwai (Regional GM IBM East Africa), Erik Hersman (Co Founder iHub  and Ushahidi), Paul Kukubo (CEO, Kenya ICT Board) and John Waibochi (Founder Virtual City) and which was moderated by the Equity Bank CEO, James Mwangi. 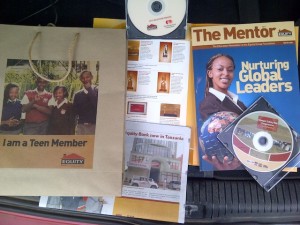 All the panelists gave brief talks on the need to innovate and change in order to survive in the world of business. Hersman spoke of the iHub with 8,000 members with the potential to change the IT status quo through phone innovations, research and super computers, Waibochi spoke of changing his business model from Simu ya Jamii, selling expensive internet, to building agriculture apps and the need to always anticipate the next thing coming, Mwai spoke of IBM’s 100 year path from meat weighing scales to typewriters, mainframe computers and restructuring and now consulting & software, while Kukubo spoke of the need for the students to visualize the next 15 years because the present was barely fathomed 15 years ago.
Tweets by bankelele