Njenga Karume was politician & businessman who grew up on a Delamere farm and in his time he became one of the richest indigenous business people before independence, and later a reluctant, but effective leader of a controversial organization (GEMA), long-term member of parliament and one time Defense Minister of Kenya. He passed away in February 2012 having lived to be an old man though he seemed to slaughter a goat (he was a generous networker) on almost every other page of his autobiography Beyond Expectations – From Charcoal to Gold (written with Mutu wa Gethoi) which was published in 2009.

Here’s another slate condensed version of the book 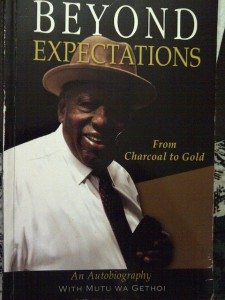