What a year it has been, mostly not for the better with petrol and dollar prices setting records, and accompanied by other shortages. The Kenya government started a military anti-terror expedition in Somalia, and as war expenses can drastically alter government spending budgets, it was recently decided to bring the mission to the United Nations and have them offset the war cost to some extent.

On to the index comparing prices to three three months ago and year ago!

Gotten Cheaper:
Foreign Exchange: 1 US$ equals Kshs. 84 compared to Kshs 95.6 three months ago and 80.5 a year ago. That snapshot does not capture the roller coaster quarter the shillings has hard, dropping to an unprecedented level of Kshs. 107 to the dollar (and being ranked as one of the worst performing currencies in the world) before the Government instituted an interest rate hike and cut back liquidity to the banking sector. While the shilling was in free fall, and few could explain why, a World Bank blog post revealed that Kenya’s exports were (at the time) not enough to meet the country’s fuel bill, (Three years ago it cost Kshs 79 /$)

Staple Food: Maize flour, which is used to make Ugali that is eaten by a majority of Kenyans daily. A 2kg pack costs Kshs. 113, down from a record high of 119 in September, but still almost double the Ksh.s 69 cost in December 2010 (Three years ago it cost Kshs 97)

Other food item: Sugar : A 2 kg. Mumias pack which was Kshs. 385 in September is now 375, but still almost double the Kshs 195 of last December. In other news Kenya seems to have applied for another extension of a COMESA import cap, denying consumers the option of cheaper sugar imports to protect the largely uncompetitive local producers who have trouble ensuring adequate supply of sugar into supermarkets.

About the same:
Communications: These are largely unchanged though Safaricom announced a modest price increase by of voice call tariffs (which Orange are itching to follow) and @Kahenya says that corporate m-pesa tariffs have also been increased.

Beer/Entertainment: A bottle of Tusker beer is Kshs 180 ($2) (at a local pub) , unchanged from three months ago. The alcohol sector has a lot of competition now with the new brands being launched (Miller Genuine Draft) and others revived/getting new marketing pushes (Redds, White Cap Light, Heineken, Windhoek, Sierra) in a realignment of brands and owners between East African Breweries (EABL) and SAB Miller.

More Expensive
Fuel: A litre of petrol was Kshs. 124 up from 117.7 in September and 94.3 last December. Two days ago, in reaction to threats of transport operators to go on strike during Christmas week, the Energy Regulatory Commission (ERC) announced the first ever price reduction since the introduction of the price control regime – and for Nairobi the cost of petrol will be Kshs 119 (~$6.2 per gallon) till January 15 2012. (Three years ago it cost Kshs 92.7) 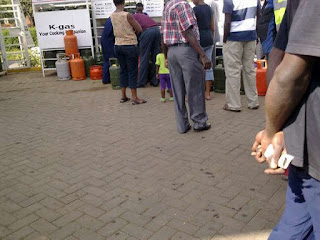 Utilities: Pre-paid electricity is about Kshs 2,500 per month (up from the regular purchases totaling 2,000). There are rolling blackouts as seen in the ads run by the Kenya Power company, spreading the shortfall across the country.

LPG – Cooking gas has been in short supply in different parts of the country, with many sellers in Nairobi not having any stock to sell for weeks. Those that do are selling them at increased prices – e.g. cylinders that used to costs Kshs 2,500 for 13KG, are selling at between Kshs 3,200 – 5,000 if you can find them.