I don’t own land outright, but I know people who do and have worked on some securities that relate to land. So here are are five trends in real estate deals that drive lead to good & bad outcomes

1. Not all land deals are equal: There is greed & fraud among buyers and officials including government (county & ministry) who will approve incorrect land & building transactions, valuers who will inflate property prices, contractors who will undercut on building materials & costs etc. There can be fraud anywhere, but mostly it is with developers who will score deal after deal and move on from a controversial piece of land. A good tip is to look out for prime, but idle or under-developed land (open parking lot, cheap Mabati (iron roof) pubs & eateries) – which mean that there’s probably a story there about ownership that deters those who know from investing too much in structures on the land. But such deals are the minority and should not deter people from investing in land. Note – these houses in Syokimau were being advertised at last month’s homes expo at a cost Kshs. 4.8 to 9.2 million.

2. Land is finite: Land is still one of the best investments, for the simple reason that its quantity is not increasing. It’s uses are changing with generations, migration and population changes resulting in different demands for land use (e.g. forest, agricultural or rural to residential, commercial or urban) but the amount of land available is the same (the rare reclamation of land by dredging notwithstanding) 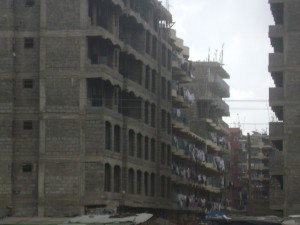 3. Banks have failed: By banks being prudent as lending institutions, this has resulted in a situation where there are very few mortgages in the country – about 20,000. This means that (i) banks have not convinced Kenyans that they are perfect partners in the construction or purchase of houses (ii) people are building out of savings, other income or unsecured loans (iii) by not using a bank for land deals, buyers & builders miss out on the professional advice that could be helpful in the land buying process.
4. Herd Mentality: Investment group, savings club, SACCO’s and other collective vehicles have been popular ways to invest in land. They have worked with, or as developers themselves to scope out, purchase, sub-divide, and sell land to their members, and other interest parties.

Buyers then flock to these developments because groups and peers who have invested convey security and more so as word spread fast via ads in the newspaper, or whispers in bars and church. While initial investors in these schemes may have been quite cautious with calculated risks, later investors will have seen the value of plots (and their entry price) triple and watched as other members put finishing touches to lovely houses that they are still dreaming of – and this can lead to a temptation to rush in without doing the usual land checks. But what if the original land deal was fraudulent? Does anyone check for the mother title or original drawings & approvals? If they took a loan or paid for professionals to assist, they may find out that the deals were not as good. 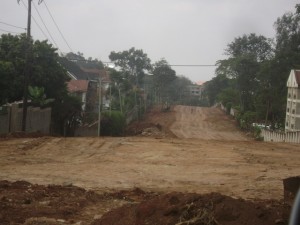 5. The Government is not Stupid or Evil: The government creates and keeps records, and the government does not issue title deeds in a casual way. Many properties are built without a title deeds or without owners having got all approvals. But the government has an institutional memory and does not forget. You won’t sell a property without clearing arrears on land or paying stamp duty.

The government also does not forget that it owns land and as Syokimau owners found out the way, the government may sit idle, but it will act when it’s convenient or necessary. Legend has it that Ugandans soldiers discovered Migingo Island when checking for insecurity points ahead of the 2006 commonwealth summit (CHOGM), and now, while KAA has tolerated the Syokimau houses for years, now that the country is at war with Somalia, the proximity of the houses to Nairobi’s international airport (JKIA) may have escalated security concerns.