Tales of kindness, Spa’s, Obama, smoking, the largest McDonald’s in the world, all in a guest post by Zack Mukewa. (Note, The Indonesia Rupiah is Rp. 8,900 to 1USD. So fairly Rp 100 to One Kshs. is fine).

I had a very low opinion of Jakarta and Indonesia in general before going there, but I was pleasantly shocked in Jakarta which is the capital of the expansive Republic of Indonesia

Getting There: From Nairobi to Jakarta, you can take two or three flights, three in some cases depending on the airline, e.g. Emirates, Qatar, Gulf Air – and cost about $1,300 – $2,000. On average it takes five hours from Nairobi to Dubai and a further 8 – 12 hours to Jakarta dependent on route and airline. This matters as some passengers may have to wait for up to 8 hours for a connecting flight from Dubai. But not to worry, as the duty free airport at Dubai is interesting enough. Just avoid ‘The Gallery Lounge’ near Gate 210 – where in an attempt to kill time the Kenyan way, I regrettably had a single Heineken for US$29!

There are several countries who’s residents are allowed to obtain visa to Indonesia at the terminal on arrival, including South Africa and Egypt from Africa. However, for others, they have to get visas at embassies in their home countries.

This is a short process, 15 minutes though there are few points where queues can delay you. Beware of some Airport crew ready to make a quick buck if you seem clueless, as happened to a Ugandan pal (pun intended).

Getting Around: Outside the airport you will find two types of taxis… Blue and Blue/Green both of which are metered. Green taxis are thought to be the safer and are quite cheap. Indonesia produces its own oil (hence lower fuel costs) so for a distance like Karen – City Centre – Westlands you will pay fairly 15,000 Indonesian Rupia…about Kshs. 150! Most Cab guys speak some English…not so good but you can communicate. Useful words are Selemat Pagi/Maalam/Sore – Good Morning/afternoon/evening and also Terima Kasih/ Thank you. Say those and mention English, they will find someone good at it to help.

Jakarta City is beautiful… Much like New York in impression. It’s fast, as they have lanes for public shuttle buses that arrive every minute, and they fill to the brim. No one pickpockets here, and they were shocked when I told them about our Nairobi bus stop tales. Jakarta also has extremely high humidity, and with temperatures in the 32-38° range, you should dress reasonably.

Hotels: Hotels are varied; I stayed at the NAM Center and at the Aston Hotel – and at commercial hotels in Indonesia, it’s common to find everything ensuite. Also they have karaoke bars which are a big thing over there, piano bars, spas, gyms. However beware of the spa…especially if the attendant asks your marital status..that is all!

Jakarta is a big City, with a total population of about 12 million people. Observing, the streets you can quickly gather the leaders of corporate Indonesia are based here. Lot’s of black cars are dot across several islands, and there are boats at most coastlines for those who wish to rent, some yachts too belonging to those with offices in the city . 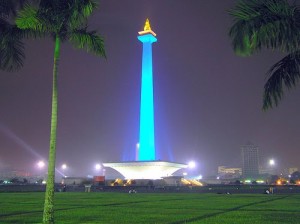 Shopping & Sight-SeeingThere are many places to visit in Jakarta, starting with the National Monument . From high up there you can see the State House, many Capitol Buildings and other interesting sites in Jakarta. You can also visit the school which (US President) Barack Obama attended, and they have a monument erected there. Being a black man in Jakarta, it seemed expect everyone wanted to take a photo with me – and I never saw any other black people other than those in the group I came with…Maybe I should pull an Obama senior stunt, in that side of the world 🙂

The City has high end shopping zones and your basic shoppers zones. For comparison, if you go to Indonesia Shopping Mall in upmarket Jakarta, you will buy their national shirt called Batik for Kshs. 10,000, but if you go downtown at Block M, you will get it at Kshs. 1,000.

Being in an earthquake prone zone, the city is built to accommodate earthquakes. Yet they also have high rise buildings as high up as 60 floors, and are building a subway under the main road infrastructure.’

Food & Bars: Sad to say, the food is horrible! I ate rice and spaghetti for all meals, breakfast, lunch, dinner, and I was thin by the time I left. The food does not have soup and is cooked in a funny, typical South Asia stuffy way. Not to worry as there are other (pricey) options, including one of the largest McDonalds outlets in the world which is found in Jakarta, and a whole lot of Pizza Huts and KFC outlets too. For sports bar fans, check out Manchester United Sports Bar… it is said Sir. Alex has been there. Sorry, Arsenal fans, I didn’t see anything for you – guess all the fans there hanged LOL!

People smoke a lot in Indonesia – Remember the stories in the news & internet about a 6 year old chain smoker? That was from there; Samata Island! As a matter of fact, in most social places you will be given free cigarettes after buying a beer. Heineken costs about Kshs. 300-700 in most places I visited.

Summary: I could easily not stop writing about Jakarta, and will have some more tales at my blog. Keep checking here though, for a guide on Bandung and Bali which will l be uploaded soon.