Kenyan parliamentarians were shocked last month when they realized that voted in last August contained a clause that required leaders to pay tax.

What other clauses in the new constitution are going to raise some headaches in the next few months and years? 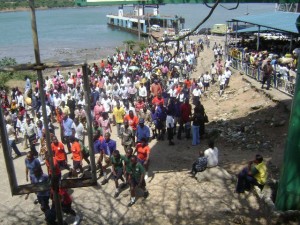 1. Automatic Citizenship: Dual citizenship is allowed – and a born Kenyan does not lose citizenship by becoming one of another country. Also citizenship can be acquired an orphan who under 8 years, or by marriage to a citizen for 7 years, or by having lived in Kenya for 7 years. The 2009 census revealed an interesting dimension to Kenya citizen origins including the Somali Kenyan and other African numbers.

2. Political Parties are Irrelevant/Term Limits ill end Career Politics: Many members of Parliament have set their sights for 2012 on becoming Governors, but these carry term limits (maximum of two). There are now term limits for the Presidents (& Deputy), county, judiciary and government officers e.g. the Inspector General of police will can serve only one 4-year term (which is not enough time for an ambitious leader to carry out reforms), but oddly, there are no term limits for parliament.

Also, in running for any of these offices, independent candidates can avoid messy, expensive, party elections by running without joining a political party; all it requires is obtaining 1,000 signatures for MP and 2,000 for Senate from their constituents. Political parties have one year to comply with political parties act or be disbanded (and time is almost up)

3 Amnesty for corruption: Parliament is yet to enact creation of an ethics and anti-corruption commission, which should be able to review un-ethical actions such as conflicts of interest actions. However for all the talk about extradition of Anglo Leasing and KPLC cases, suspects can’t be tried for acts that were not offences in Kenya, or under international law. These may include corruption-related crimes, which were legislated – in 2003 (for economic crimes) and 2010 (for money laundering). The it wasn’t a crime at the time defence has already been brought up.

4. Raise Local Taxes to support Counties: There will be 47 County Governments that will receive and share at least 15% of revenue raised by the state. Using the 2011 numbers announced this week, based on tax revenue of Kshs 634. billion ($7.5 billion), the county governments will split Kshs. 95 billion. Counties may collect property, entertainment and other taxes approved. However, while counties like Mombasa, Nairobi, Narok etc., have significant sources of revenue from (permits, tourism), many counties governments are not currently, self sufficient and will have to obtain new revenue streams. County government may take loans if their assemblies approve, but only if the national government guarantees them.

5 Civil Servants can’t own Matatu’s or Kiosks : Corporate governance is set to improve as the number of state directorships is implied and directors can’t be involved in politics (e.g. chair a company and a political party). Also a person who has been removed from a state office for a violation is not eligible for any other and crucially state officers will not be allowed to have other gainful employment – is this a repeal of the (controversial) Ndegwa Rule that allowed civil servants to engage in private business?

6. Land Use Restrictions: There was a story in the newspapers this week about a land grab in the Tana Delta. The new constitution requires that Parliament ratify concessions of land and mining agreements. This effectively puts an end to the practice of Desert states, foreign universities and corporations signing up farmland for their own food production. Parliament will also set other rules on land investment, minimum and maximum land holding, matrimonial sharing and inheritance