Intro: Despite the changes sweeping across North Africa, business analyst and columnist, Carol Musyoka took some time to visit Tunis and kindly agreed to do a guest post

Getting There: You have limited choices, flying to Tunisia and have to go through the Middle East or through France. Tickets from Nairobi start at about $800 on Emirates, Eqypt Air, or Qatar Air (which I used).

The airport (process) is horrendous as Visas are issued on arrival. Though, my hosts had already pre-arranged for the visa, the officials at the airport were rude and sleepy – and despite arriving at 6 A.M, I only left the airport at 9 A.M. Also, they only accept payment in Tunisian dinars (which no one carries) and you have to be given a pass to walk out of the Arrivals terminal to go to a foreign currency bureau to get it.

Getting Around: Tunis has a very good public transport system in the form of buses. I used a cab once or twice, but it’s too hot to walk around since temperatures were in the forties!

Mediterannean from the hill atop Sidi Busaid

Security was good pre-Ben Ali (Abidine Ben Ali was ousted as President in January 2011) and has slightly deteriorated. However I never felt any danger because it was summertime and the streets would be packed past midnight.

Language/Communication: The language you need here to get around is French, not English. I didn’t make any calls but used my Safaricom roaming to send text messages for the two days I was there, only to come home and find a bill of approximately Kshs 5,000/- ($60) for two days of texts!

Food & Life: There are different kinds of hotels as Tunis is a big tourist destination. Also an important point to note about African cities these days is that the electricity supply is very reliable.

Main local dishes are couscous and lots of Middle Eastern food. very delicious for the adventurous palate. Beer and alcohol was available and is now available to the locals unlike during Ben Ali’s time when there were restrictions on how much they could buy at the supermarket.. Imported wine costs horrendously as they have a protectionist policy to promote local brands

Much of the street & bar talk at this point is about life post-Ben Ali especially as there’s so much freedom now that the secret police have been disbanded. 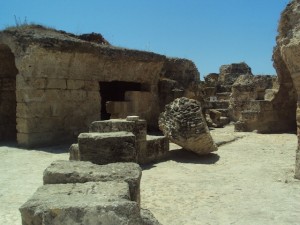 Shopping/Sight-Seeing: The beaches and of course the ancient city of Carthage. There are lots of shopping areas, but I loved Sidi Busaid the most. Tourists buy tons of knick-knacks made from porcelain and camel leather. 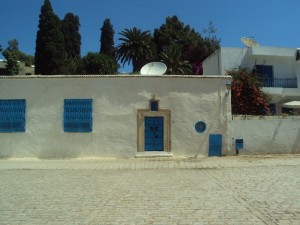 Biggest surprise about the country: That it feels like you’re in a European country with an Arab population. Also, and even more amazing, was finding that they have black people from the South! One odd sight was that there are tons of men who just hang out at cafes smoking cigarettes and shisha pipes all day.