Much has happened since the last real estate post and there is a lot of construction of buildings in Nairobi with towering cranes all around in many directions. Here’s an update of what’s in, and what’s out in the real estate sector.

How to profit from real estate: Is a story by MP Cyrus Jirongo who has a colorful history, but writes about his real estate success and says it was not due to strong political links in the 1990’s.

Golf Estates: The latest is Sergoit Resort in Eldoret town. Others are Green Park, Thika Greens, Tatu and Vipingo Ridge.

Hotels: The East African newspaper has an article this week which notes that there are at least 10 new hotels in Nairobi are planned, which will add about 2,500 rooms to the City.

Luxury Apartments: Most vivid is the English Point Marina apartments in Mombasa that will cost above Kshs. 50 million (~$555,000). They have been running ads in a few newspapers (but some of which need to be put through a spell check)

Investment Groups: The Kenya Finance Minister’s Budget speech in early June, proposed recognition to real estate investment trusts (REIT’s) as an investment class under the capital markets act. Rules for REIT’s include membership must be at least 25 people, no one member shall own more than 12.5%, and dividends will be taxed at 5%.

Universities: University campuses now occupy or own many buildings in Nairobi and many other towns – and when Standard Chartered Bank moved out of downtown Nairobi earlier this year, their building was sold and is expected to be leased to a University campus.

Social Media: @Kenarchitect (of the Architecture Kenya website) is one interesting person to follow on twitter, and here’s a re-cap of observations on real estate happenings from around Nairobi in the last month:

– Watching (Special Programs Minister) Esther Murugi on @citizentvkenya saying that they’ve given IDPs Kshs 35k ($400) to rebuild their houses. What kind of house can you build with 35k?
– The more we entertain the myth of rural richness, the more we delay in getting the solutions for the city – A case for rural-urban migration
– Kenya needs 410 houses daily. I have been supervising 350 houses for the last 2 years. 144 will be ready by Dec. It’s a tall order.
– Tena estate sewage crisis, it’s too serious. NWSC must do something about it.
– Believe it or not, these rental houses in Ruaraka are way cheaper than those mud/paper walled rooms in Kibera. http://twitpic.com/57e9lr
– Bill to Tame Rogue Contractors http://wp.me/pUg5Q-pf
– Who owns Hotel Boulevard? With better decor and good service, they will give Norfolk a run 4 their money. http://twitpic.com/58omyk
– Architecture of Kiambu. 200 by 200 mm columns. Four floors. No slabs. But the building will not collapse……. http://twitpic.com/59ye50
– Containers are quickly gaining popularity as the new form of construction. Let’s wait and see what the future has http://twitpic.com/5akxpm
– Would you live in a ten-storey apartment block? Many of these are coming up in Pangani. http://twitpic.com/5awxd3
– Winners Chapel on Mombasa Rd, will be the largest auditorium in Kenya with capacity of 30k. Crowd control?????? http://twitpic.com/5ax3nd I can’t stop tweeting about this church set to be Kenya’s largest auditorium. Its capacity rivals Nyayo Stadium. http://twitpic.com/5eph3n
– Kenyans rarely ever consult architects. The thinking is that we are expensive consultants. NCC does the approvals and enforcement. But corrupt inspectors use the inspection exercise as a money collecting scheme…..
– There were people between the slabs. Check the other photo, someone being pulled from under a slab. http://twitpic.com/5bj1gr
– Karen is rapidly shifting in2 a half acre neighborhood. Karengata seems to have given up the control fight. http://twitpic.com/5d6ytm
– #ChineseContractor, how do you do these massive retaining using blocks without reinforcement? #NewTechnology. http://twitpic.com/5hlbzk
– Wall clad at Rahimtulla Towers started falling off, they had to remove it all. Ugly spikes remain. #PoorDetails http://twitpic.com/5hmrjs It was a case of poor detailing an fixing by the architect and contractor. The tiles were falling and could have hurt people.
– Swimming in this cantilevered pool at Sankara is like displaying your ‘items’ to the street below. Would you? http://twitpic.com/5i21q7 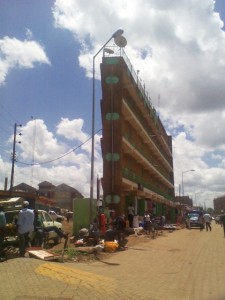 A building next to Nakumatt Wendani (via SavvyKenya)

Building Standards: There have been a few building collapses in the last few months, which has been followed by public complaints and Government promises of stern action to be taken including demolition of sub-standard or unsafe buildings. This column in the Standard points to process flaws in the building industry, noting;

It is not a secret the so-called site engineers and contractors shown on site boards planted outside upcoming buildings are mere decoys. The actual ‘contractors’ are some shady and opportunistic characters that promise to cheaply put up the floors required in two months and claim to know their way around City Hall

To get things done, they file different sketch plans and specifications with City Hall and claim they can compromise on costs and materials without affecting safety and durability. That is why there are no lifts in all five-storey-plus buildings in Eastlands.

Farm land: Farm land is losing out to housing in prime agricultural parts of Central and Rift Valley. However, he’s an opportunity from (fellow blogger) MainaT – land for sale– 145 acres, 2 kilometres from Namanga at Ksh100,000 ($1,110) per acre that is suitable for dairy or wheat farming or speculation.

Cinema Halls: Like dry cleaners, repair shops, and cyber cafes, another business whose time seems to be passing is Cinema halls who have been struggling with low attendance and high prices (~Kshs 500) relative to bootleg DVD’s of new movies that cost Kshs 50 (~$0.55). (Read Biko Zulu’s article lamenting the end of cinema going era)

A couple of Nairobi movie halls converted to churches and meeting halls, and Silverbird Theatres went out of business a few months ago, leaving one main movie chain – Fox E.A. However, there are some investors who believe there is still life in movie theatres and the former Silverbird halls are currently being re-opened and screening new movies.

Tax benefits: In reviewing ways to bridge Kenya’s budget deficit, there have been quite a few suggestions to re-introducing a capital gains tax in the country, which would also touch on real estate. Right now the state collects a stamp duty based on the value of a property (4% for urban, 2% for rural) at the time property is transferred.