Pepsi were expected to re-enter the Kenya market via a full blast push, like Airtel’s onslaught on Safaricom.

But with Kenya being an long time entrenched Coke market – bottling plant partnerships around the country with the quasi-government (ICDC) and politicos, a different mode has been adopted, with production/bottling in Mauritius as opposed to having a plant in Kenya. 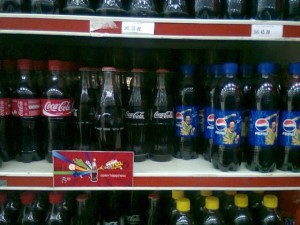 For many years Pepsi used to be hard to find in neglected corner shelves of the main supermarkets, but over the last few weeks that barrier has been closed with plenty of Pepsi (and Mountain Dew) now priced the same as coke (both 45/= $0.55 for 1 500ML plastic bottle) and prominently placed, sometimes occupying the same shelf space. Previously Pepsi was priced at almost double the price of coke (60/= when Coke was 40/=).