Over the last few week, I have been exposed to various events and lessons that touched on entrepreneurship. We had the Legatum business awards winners feted in Nairobi, talks by some young US technology start up executives, and got to watch the movie ‘social network’, and final episodes of the Apprentice beamed live from the US.

Talk 1: Russell Simmons co-founder of Yelp.com and Jawed Karim co-founder of Youtube were here for i/o Ventures which aims to incubate start up entrepreneurs and formalize angel investing – this is because giving back is a big deal in Silicon Valley.

They talked at the Nairobi iHub and some of the business advice they imparted to local entrepreneurs included
– What you are working on, will be different in 3 to 4 years, but keep going & don’t give up
– If you have bad chemistry with an employee/co-worker, fire them as soon as possible – as dealing with them takes up so much productive energy
– It’s hard to find good team members. But it may be better to recruit from universities, as enthusiasm trumps experience
– Get your product out immediately, don’t over tweak – perfect it as you go along. Also, instead of juggling many projects, focus and do one project really well – hit home run and people will line up for more
– On Intellectual Property: In Kenya, theft of ideas is a big worry with young companies seeking partners & financiers, but their advice was that in Silicon Valley, theft of ideas not an empirical problem
– If you have idea, someone else has same idea – and having idea does not give you advantage, it’s about being better to execute better than anyone else,
– Don’t be afraid to share your ideas, because once you launch, everyone will see it anyway

– Most important elements for him were the team, customers and profit incentive
– Don’t make customers happy – blow them away – kayak.com is the best for getting cheap flights (actually make more money from hotels than airlines)
– Take risks, but pick partners carefully.
– He has no customer service, everyone in the company does that
– Be the best; He said even if an employee took their code to a rival, he believes he’d’ still build a better travel site

At the talk, Communications PS Bitange Ndemo also talked about push to have a sub-patent law and creative commons in Kenya, as opposed to unwieldy patents – these are suitable for local development of incremental innovations as many creations will not qualify pass IP test. He also believes it’s best country for have flexible laws until we develop further

Apprentice: Got to watch the final few episode of Donald Trump’s Apprentice – which this year featured Kenyan born Liza Mucheru-Wisner. She was one the 16 contents, picked from several thousand applicants and made it to the final three. She would have gone further but for the sudden decision by Trump to fire her even when her team had won a challenge.

Earlier, in defending her decision on that project, she got into a debate with Trump about race as a factor in marketing of products, and Trump said he fired her be she did not get along with her fellow contestants – and she was shocked because they were all in a competition to win, not be popular.

The apprentice is a TV show with plot, structure, bad guys, and a defined ending. But it’s a microcosm for business & entrepreneurs who face different challenges, have to play multiple tasks, who’s plans don’t always go right, may not have the resources they need or you don’t get to work with the right people – and there’s always a bit of improvisation to get a win. 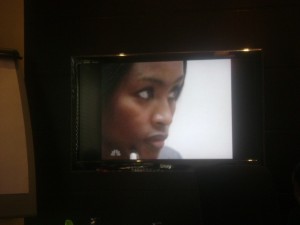 Liza Mucheru-Wisner, Apprentice Contestant
It’s all cut and edited into a dramatic hour package for TV, which means that you don’t see a lot of the hard work that contestants put in. Liza said she actually got a long with all the contestants and the harsh comments were never repeated in front of contestant during tasks, but only came out in boardroom, when everyone was fighting for to stay in the show.

Despite not being the Apprentice, she does not feel like she lost. She represented herself well, put a spotlight on herself and her passion (education, kids, technology) and as a result she’s got lots of offers to consider, one of which may may involve becoming a goodwill ambassador.

Social Network: This is a well received movie about the origins of Facebook – and which leads Roger Ebert’s list of top movies of 2010> I got a 50/= ($0.6) bootleg copy in Nairobi and it’s a must see for any entrepreneurs – with lessons on maintaining focus amid changing business concepts & expectations, management, and picking/rejecting partners