Buy Buy Buy Many signs are pointing on the need to invest in property/real estate; from a mentor who says that land is the only commodity that is not increasing, to Dr. Laila Macharia, who in her TEDxNairobi talk said the boom is yet to come. NSE listed Centum Investments now has real estate projects on Uhuru highway and at Runda, and even a local reality show star (runner up in Tusker Project Fame) Nganga said in an interview, that if he had won, his Kshs 5 million ($62,500) would have been deployed into real estate.

Also, last week Hass Consult and CFC Bank released a report showing that real estate outperformed stock market in returns; I’m yet to find the report, but a post in 2006 shows that the debate of shares verbs property returns is not a new one. 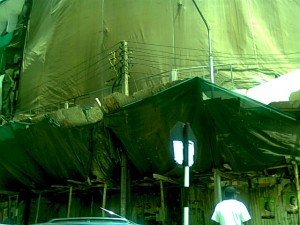 Money flows in real estate? A lawyer who specialist in commercial law has found herself doing more real estate transactions – and is surprised by both how much money is being invested in land deals and how expensive Kenya is compared to south Africa – e.g. a 120 million Nairobi Muthaiga property, can be trumped by a better one or Kshs 50 million in Cape Town.

The recent prices are subject to much debate Is it simple demand (for 500,000 homes a year) & supply (150,000 new houses built a year in Kenya)? Is it Somali money or foreign investors & donor agencies, or is Kenya an investment Mecca for the east Africa region?

Housing Finance wrapped up a mortgage bond offer that realized Kshs 7 billion ($88 million) against an initial target of 5 billion. The bank has been in turnaround mode, gone from cost/income ratio in 2005 of 73% to 58% in 2009 and non-performing from 35% to 4% over the same period, and has fended off interest from Equity Bank. The Bank’s MD also called for the Capital Markets Authority to green light real estates investments trusts (REIT’s) as the bank also became the latest corporate to join the world of twitter (@housing_finance).

But few are biting: How many mortgages in Kenya? A central Bank of Kenya source says there are only 14,951 mortgages, in a country of 38 million people. (0.04%) with a total value of about Kshs 60 billion, for an average mortgage of Kshs 4 million ($50,000) Samuel kantai – so banks are not the source of real estate developments.

Any other thoughts on real estate?