Bankelele app: From this week, the blog is now available as a Nokia app that can be downloaded from the Nokia Ovi store. This is because, one problem with being on the blogger platform, is that it is quite difficult to read, and bulky to download, via mobile phone; this is now fixed, with this simple app, created using the Ovi Store appwizard, making it very simple (and small) for (Nokia) phone users to read the blog content. (Edit – thanks to Mwirigi of the E63 Club)

Nokia remains the premier phone used to access the net in Kenya, as confirmed in the latest state of mobile web report which had Nokia phones occupying 8 of the top 10 positions in this region. 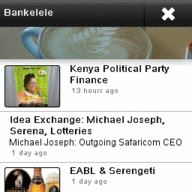 Samsung app: The other two phones on the same list are from Samsung who are also emerging in the region with space for local developers, with a store for Samsung apps, and which will be explained further at the next Mobile Monday at the iHub on developer opportunities for monetization with Samsung.

– Women Developer Opportunity: There is an mWomen App challenge for women developers from Vodafone to build apps for basic phones and for smart phones.
– Echoing Green: Their fellowship program is now accepting applications with a top prize of $60,000 for individual start-ups that will win capital and technical assistance.
– Tandaa Funding The Kenya ICT Board has a Tandaa funding challenge in which six companies will pitch ideas to venture capitalists in Nairobi.
– EDIT: Apps for Development Challenge from the World Bank, with a first prize of $15,000
– Finally, the US Embassy in Nairobi has launched the annual diversity visa lottery for anyone without an app; 3,000 Kenyans expected to win green cards.