Half-year Growth: Kenya’s Nation Media Group released their half-year results on August 2 in Nairobi. The results were impressive for a media house, and as their CEO (Linus Gitahi) noted, newspapers still show double-digit growth in Asia, Latin America and Africa.

At NMG Circulation numbers were up in terms of Nation copies distributed (up 6%, though no numbers cited), circulation revenue of the East African is 5% and business daily is up 10% – and overall the newspaper division had operating profits up 36% thanks to reduced costs.

NMG has also expanded in the region (Tanzania and Uganda), invested heavily in digital media, but pulled out of a magazine venture (EAMagazines) before it collapsed. (The venture has been revived with new owners, and one magazine True Love is now back in publication)

They have also reached out to the online community and social media – as the CEO mentioned Facebook several times noting the 100,000+ fans of their EASY FM radio station. Also, like with the Pan African Media Conference that marked their 50th anniversary, NMG reached out to the online community via invitations to bloggers to attend the announcement, and the CEO noted the presence of DJ CK (Chris Kirubi) and Aly Khan Satchu of Rich Management.

(The CEO’s half-year presentation can be downloaded from the NMG investor page).

TV In –n- Out: The Indian Ocean Newsletter hinted that a new TV station and a new newspaper would hit the streets of Nairobi on August 1. No newspapers are out yet, but a ‘new’ TV station is now up on air. At recent, events the presence of staff with the ‘GBS’ name (not to be confused with the collapsed UK sports broadcaster GTV) have been noted, but few knew what that meant. Now the station is air with a very powerful signal – as the Good News Broadcast Service a.k.a GBS with a mix of news and Christian programming

However, still missing from free airwaves is CNBC Africa which is no longer broadcast on free TV in Nairobi and is only exclusive to satellite subscribers on DSTV 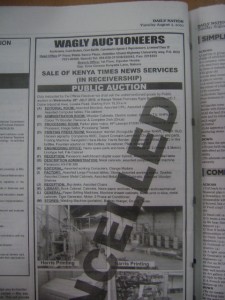 Kenya Times Falls: Also missing from many streets and the advertising radar is Kenya Times newspaper which has floundered ever since KANU lost the Presidency in 2002. Dalliances with potential new owners, editors, investors have not borne fruit, and last week there was a notice in the paper about the entire office and press of the newspaper going under the auctioneer’s hammer. Today’s paper has another ad cancelling that auction but it’s probably just a postponement of the inevitable unless …