Safaricom announced in a statement that their long-serving CEO Michael Joseph will step down in November from the helm of the company. He has been CEO as long as this blog has been around and a search through archives finds these posts 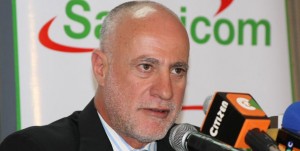 image from the business daily

Other Blogs
– Kainvestor asks if he was a corporate legend?
– Ratio Magazine on how the retirement may shake up the local mobile & telecom sector
– Interviews with the CEO