After the Ecobank AGM in Nairobi on June 11 for shareholders only, there was a media briefing with Arnold Ekpe – Group CEO, Kolapo Lawson – Group Chairman, Tony Okpanachi – Managing Director Kenya and the other executive directors of Ecobank.

At the session were journalists from several African countries including Ghana Nigeria Rwanda Uganda Zambia, Kenya and various media houses including AllAfrica asked questions of members of the board, mainly answered by the Chairman and the Managing Director. Questions were asked in English and French and the (multi-lingual) directors answered each in the language asked, with the CEO summing in English sometimes.

A lot of the same information given to the press was also disclosed to shareholders during the AGM, and at some point, the CEO asked business journalists to read the actual full annual reports, not just the abridged versions, as a lot of the answers were there.

Ecobank serves African countries and African countries always have needs for financial services. E. g. The Democratic Republic of Congo (DRC) can be Africa’s richest country, it needs financial services and Ecobank has invested about $30 million in telecommunications and small & medium enterprises (SME’s). They understand the risks they face such as non-payment of loans and mitigate those risks. Also, wars can’t last forever, and they saw this in Liberia where they were the only bank that remained during the wartime and are now the largest bank in the country.

Also, they plan to be a world-class Pan-African bank. They devote 1% of their after-tax profit to an Ecobank Foundation that has helped a lot of young entrepreneurs and they are the leading micro-finance bank in Africa, with MFI subsidiaries, in addition to commercial banks, in Nigeria, Sierra Leone, Cameroon etc. They have also lent between $500 million to $1 billion to other micro-finance institutions

Asked about the 38% decline in profit attributed to Nigeria’s banking problems: Ecobank’s exposure in Nigeria is 30% compared to the rest of Africa, which is 70%. They are competitive in Nigeria and going forward they see markets like East Africa, and Southern Africa (notably Angola), as being more important over time to an extent that problems in one market (country) should not adversely affect the bank’s bottom line.

What is unique about Ecobank? (asked by a Zambian journalist who noted that they and other banks had invested in Zambia at the height of the global economic crisis?) 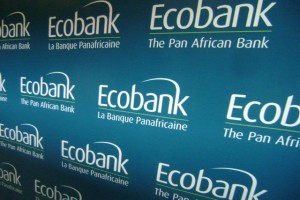 They are present in more African countries (29) than any other bank in Africa: from Zambia, one can transfer cash within Ecobank to 28 other countries and a customer can use an Ecobank card in all their 29 African countries, including South Africa during the World Cup and access to thousands of ATMs.

Another question was asked (in French) and from the answer, it seems to be about delays in Rapidtransfer – through which one can send cash to 29 African countries within 24 hours. They answered that they have to comply with anti-money laundering/fraud verification, and they use text messages for the transfers, and if the recipient is not available, the money is refunded to the sender. CEO said there are more Africans in the African Diaspora than outside Africa and they transfer a lot of money which is what Ecobank is facilitating, noting that the volume of ‘Rapidtransfer’ had trebled in 3 months

The genesis of the bank was in a private-sector attempt to facilitate regional trade in the ECOWAS (Economic Community of West African States) region. To this day they try and facilitate regional trade within Africa, among African countries; in East Africa, regional trade is ‘high’ at 20%, West Africa it’s 10%, and Central Africa is at 2% – compared to Europe at 60%. The bank enables business people to trade across countries instantly, and in East Africa when the EAC protocol takes off on July 1 2010, they will be the only bank with such a presence in the five East African community countries.

Fundraising plan: Of the $3 billion targeted in the rights issue, they managed to raise $778 million. They had earlier discussed with shareholders and plan to raise another $500 million this year and more when conditions improve.

Why staff numbers are down?: Overall, in the last few years, staff numbers have been on the increase going from 3,000 to over 11,000, but they shed some staff in 2009 through rationalization and efficiency programs.