On 29th January 2010 shareholders of Uchumi Supermarkets [in receivership] held a meeting at the Kenyatta international conference centre KICC). It was not really an annual general meeting as the Specialist Receiver-Manager (SRM) Jonathan Ciano noted in his opening remarks. It was a meeting of shareholders, and he was a guest (angling to be CEO though). There is no board, but the reorganization task force sat at the high table as the board and the meeting chairman was the Kenya Government Solicitor-General Wanjuki Muchemi. It was part company meeting, savings & credit/investment club and religious meet that one felt a sense of revival or resurrection [of Uchumi] whose receivership period may end early in February 2010 – after almost 4 years!

Investor Relations: Uchumi has been run like a company in all aspects during the receivership. Most important has been the way the SRM has communicated with shareholders, dealt with suppliers (given them as much preference as banks), and produced and published periodic financial accounts (both un-audited and audited) – a normal Receiver-Manager only has to produce an abstract of receipts and payments to be filed with the government and the banks. At the meeting entrance, all shareholders were handed a CD with audited accounts for the years 2006 2007 2008 2009 a/c [however, so far I’m unable to read mine – which is unreadable / corrupted] 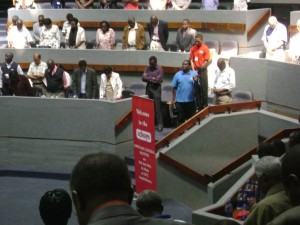 The earlier published agenda for the day was:

The Trade PS Mr. Ali also spoke, and then it was the turn of the SG. Solicitor General (SG) Muchemi said nothing was fundamentally wrong with Uchumi when it collapsed, just bad governance. President Mwai Kibaki and the government were determined that this icon of Kenyan business would not be allowed to die and he was asked to lead a task force to revive the company (along with investment secretary Esther Koimett and then-Trade PS David Nalo). He led the team re-negotiated all loans and leases and appointed SRM. He noted what US President Obama did to bail out US banks is exactly what Kibaki has done to revive Uchumi and that it was done in a unique was because traditionally in Kenya, companies that go into receivership, usually die (are liquidated, not revived).

The E&Y auditor read out their report and noted with an emphasis of matter that still the liabilities of the company exceeded the assets the 180 million. At the time they were appointed, the accounts had not been audited and they have now been able to audit accounts for the last three years for presentation to shareholders.

Other: I left early [after the adoption of audited accounts and confirmation of Ernst & Young as auditors] but it seems all resolutions were passed. 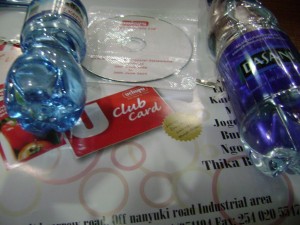 SWAG: Small calendar, account on CD, and plenty of water to drink. It was a duel of local barons between former director Chris Kirubi (Dasani from Nairobi bottlers) and Kimani Rugendo (Mt. Kenyan brand water) and there was so much ~4 per shareholder seat.