So it’s now clear to all that the Rift Valley Railways era of managing the Kenya to Uganda RVR railway concession may end in the next few days. 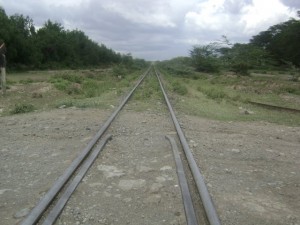 And it’s now apparent to many that Roy Puffett, the RVR Managing Director, was a conman, who conned two governments (Kenya and Uganda), the International Finance Corporation (IFC) and PAC who brokered the deal. Running railways is not easy it seems and even Tanzania want to end a troubled rail concession granted to an Indian Company

Puffet has been silent, holed up in boardrooms trying to squeeze out more payments while the clock is ticking. Much has changed in three years when many thought he was another Michael Joseph (Safaricom) who would save the railway from collapse and transform it to unparalleled success thought private management

In 2007, he gave a public talk to members of the Institute of Economic Affairs (IEA talk) and the public that is republished below:

New start: RVR is a 25-year concession between a consortium of companies and the governments so Kenya and Uganda.

RVR got off to a start in November 2006 and suffered 61 derailments that month. They have since slowed down all their trains as a measure to contain such incidents. They now average 10 – 12 incidents a month – from a combination of equipment, railway and human failures (including sabotage)

Financial & Investment: So far the consortium has invested about $18 million. The shareholding is 70% foreign (Sheltam, and an Australian company) and 30% local (Transcentury – 20%, ICDCI – 10%) and some financing was sourced from the IFC.

Some attendees later asked why Kenyans were not given a chance to invest in the company (like the Kengen IPO) to which the MD replied that there were not a lot of investors rushing to build railways in Africa (only 2 groups bid for the concession).

They have focused on getting a working fleet going. This has entailed reducing the fleet to contain only trains in good condition and they also got back 5 locomotives from Magadi Soda. Fleet repair is slow as the company faces a lead time of 8 months for locomotive spares.

Their workshops were run down, with no tools or equipment, and many of the sheds had long been taken over by other businesses. The remaining sheds had leaking roofs, and when it rained they had to stop maintenance work for fear of electrocution.

Railway: Demand from china for steel has driven steel prices through the roof. There are few companies making railway parts (and African countries have a different railway size) so it takes about 8 months to deliver (they have to order 4,000 tons at a go) which is expensive. One engineer (from the UK) at the talk said that such a railway would be shut down with all the incidents if it was in Europe – the MD replied probably true but this was the state of things. He added that new rails were be laid on the Mombasa – Nairobi line after which the older ones will be taken out and used for other upcountry lines.

Operations: RVR have done quite well since they took over in November 2006 and move about 200,000 tons per month. While this has not changed much in volume from before the concession, they are achieving this with two differences (i) they are using a smaller fleet (ii) and they are collecting more revenue (from increased efficiency & reduced corruption in revenue collection) – about $6m a month. Their volumes dipped in December and April following flooding from the rains. The MD mentioned that they now take between 4 – 7 days to move cargo from Mombasa to Kampala – from 20+ days before, though some members of the Kenya Shippers Association disputed that there.

Customers: While there have been complaints about the slow movement from the Mombasa port (including by the Kenya Ports Authority), the MD said that 50% of the 14,000 containers at the Mombasa port don’t have proper documentation.

He added that business people were contributors to this i.e. as a result of the past railway inefficiency, companies had taken to using railway train wagons at Mombasa as extra storage facilities. But when the railway movement improved, and cargo was now moved upcountry, the same businessmen took their time to offload goods, creating more congestion.

They have tried to contain prices and their charges ($0.05 per ton per km) compare well with, truck companies (that taken advantage of rail inefficiency to jack up prices)

Passengers & Commuters: they will run commuter train services (in Nairobi) for 5 years, but this is one thing none of the bidders for the concession wanted to continue running – as it is a loss-maker.

Kenya Railways: The corporation still exists and will oversee the concession on behalf of the government of Kenya, while also maintaining a register of railway assets. The corporation still has a great burden from the past – illustrated by Kshs 31 billion of debts (about $600 million). Including a 12 billion pension deficit. They hope to use land sales to pay off their employee (and perhaps supplier) obligations while also talking with the governments to waive some debt. They have also received 1 billion shillings form the world bank to resettle some residents in Kibera who live/work too close to the railway line (but this plan/financing is already 1/ ½ years behind schedule)

Summary: The MD mentioned that there was a lot of expectations about the now-concessioned railways – some of which were not close to being realistic. He also added that they had fewer customers as a result of the slow uptake by the concession, but added that RVR had no regrets and that the governments of Kenya and Uganda were very supportive.

So, a rough but promising start by the company who now say they have enough locomotives working to achieve their 5-year targets. Will they be a celebrated success like Safaricom? We’ll know in a few years.