Entertainment: A bottle of Tusker beer (at local pub) is now Kshs. 140. This is up from 120 price of three months ago and also a year ago. There is a proliferation of new pubs all the time in Nairobi – and as others shut down, more entrepreneurs step up (with a new name, coat of paint and furniture) to take their turn behind the bar counter. The median price in Nairobi now seems to be 150 shillings ($2) for a beer, as Tusker brewer east African Breweries (EABL) remains untroubled by Summit of Keroche (what’s to blame? – poor distribution, dirty tactics by EABL, poor marketing?) or by the reports that South African giant SAB Miller may choose to re-enter the re-enter the Kenyan market following collapse of an EABL-SAB agreement in Tanzania.

Electricity/utilities: this month’s electricity bill is Kshs 2,100 ($28) compared to the 1,900 of three months ago, as well as last December. 2009 has been a year of harsh reality checks for Kenyans with the failure of rains, drying of dams and water & electricity rationing programs. And while electricity rationing has ended, water rationing is still on in urban areas, and in rural areas, water sources are diminishing and the usage of water is becoming a cause for tension among communities and neighbours. The government has set out to reclaim and restore water towers in the country, notably the Mau Forest, and has made investment in geothermal energy and is linking up with neighbouring country grids (Ethiopia, Tanzania) ; unfortunately wind and solar energy are not considered to be viable large scale avenues worthy of requisite investment.

Food: though the inflation impact of food items has been played down by the Central Bank (CBK) who said food prices distorted inflation figures, there has not been much change in the last quarter. 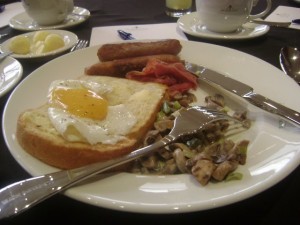 food is bad for inflation
Staple Food: Maize flour which is used to make Ugali that is eaten by a majority of Kenyans daily. A 2 kg. Unga pack at Uchumi today costs Kshs. 83 compared to 84 three months ago. But this is much better for consumers than the 97 shillings of a year ago.

Consensus among farmers and traders is that 2010 will be a worse year for food production in the country, so we’ll see where prices are next year.

Communications: there have been lots of developments towards reducing the cost of communications as competition in the sector heats up.
– Mobile giant Safaricom, who told institutional investors that they aim on becoming the ISP of choice for Kenyans, have been pushing out internet devices at a rapid pace. The company earned 7.2 billion ($96 million) from SMS and data in H1 of 2010 (up from 2.1 billion a year ago). They have now partnered with Equity Bank to get laptops computers (with free modems) to thousands of consumers by way of bank loan
– Both Safaricom and Orange (Telkom Kenya) are selling 3G modems’ at a cost of Kshs 2,000 (~$26) – these used to cost 4,00 before. And with Safaricom you can cash in just 2,000 bonga (loyalty) points and get the modem, which used to cost 15,000 bonga points a year ago.
– ISP’s respond Wananchi have lowered Internet prices of their broadband zuku packages since the arrival of fibre cable connection in Kenya. Meanwhile KDN is offering free butterfly service over Christmas and have a program with family bank to offer free wifi services to their customers.