Twitter is a micro-blogging tool that is really nifty for doing mini-posts, forwards and other remarks that (are on any subject) and are maybe not worthy of a full blog post. Here’s a summary of my week on Twitter in a Dave Letterman top 10 format :

2. Kenyan Corporates on Twitter
– can the real Kenya airways please stand up!!.. @kenyaairways and @kenya_airways on twitter, is one a squatter or both? (Via @jwesonga)
– Following @samtwit and @coldTusker as they sort out which is the genuine #kenyaairways twitter account. They could both be fake or fans
– @samtwit confirmation should come from a twitter link at the #kenyaairways site. A smart aviation buff can fake a corporate twitter ac
– @KenyaAirways is the official #kenyaairways twitter account. (@coldtusker, @rafikikenya – via semi-official source)
– Finally an indigenous Kenyan bank on twitter @familybankkenya

1 Tusker brewed in Ireland
– Tusker now sold in 500ml cans, cost 85/= at uchumi. @archermishale get well, and catch up with @inexes 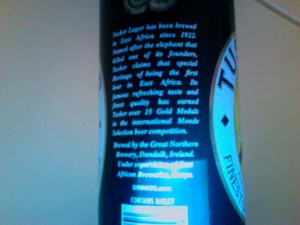 – The Tusker 500ml can is brewed in Ireland! EABL #Fail #godblessthierryhenry