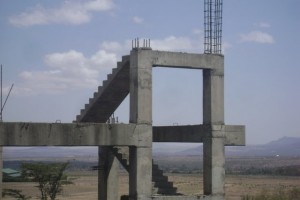 stairway to heaven
The last few years has seen white elephants disappear from the scene, as seen in defunct projects that have stalled, and died and are condemned to ridicule. They dot the landscape in towns and rural areas and are seen as monuments to changing global trends, poor planning, bad management, government pork, largesse, populism, toxic corruption etc.

Properties lie dormant for years, idle, and then every few years, someone comes along and picks up a white elephant carcass and revive, breathes life back into it; sometimes its the government and sometimes its the private sector, foreigners, other entrepreneurs who come along and say; that “it was a good idea, but it was executed wrongly ((e.g. the Numerical Machining Complex is something every industrialist talks about but is forever condemned because it was associated with the Nyayo car), this time we’ll do it correctly” – and they throw in some cash, put a coat of paint, sometimes tear down white elephant carcass, re-open a factory or hotel, put on a new coat of paint, add a production line, change the public image etc. And things change for a few years in the revived area.

But it’s a cycle of up’s and down’s – and when one year something is revived, somewhere else something is going bust. This week as there are plans to revive Panpaper, down goes the Kenya planters coffee union (KPCU) and numerous dams built for water conservation at apparently inflated prices.

recent pics of a few